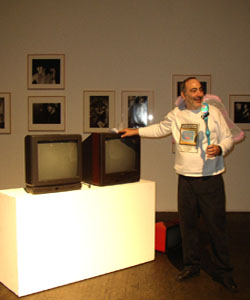 It’s a festival your parents probably wouldn’t approve of. At least, they’d do some research before sending you cheerily on your way. It’s not really all that scary, but it has foundations older than the moving image.

Here’s another history lesson for you kids who don’t pay attention in class. The Nihilist movement started in the 1860s with Russian anarchists who rejected authority. Tsar Alexander II was assassinated in 1881, and the Nihilists’ reputation was spread throughout Europe as advocates for the use of violence to bring about political change.

There, those ideas right there are what your parents fear: violence and rejection of authority. Honestly, it’s not something I would want to infuse in my children’s minds either.

However, nihilism has come a long way since its violent beginnings. Although the word was coined by German theologian Friedrich Heinrich Jacobi, it was made popular by Russian author Ivan Turgenev in his 1862 novel Fathers and Sons. “Nihil” is a Latin word meaning nothing, and nothing is the common thread that strings nihilists together.

Existential nihilists suggest that life is without objective meaning or intrinsic value. Moral nihilists argue that morality does not exist innately.

Nihilism is no longer a high-society concept that is strictly for the philosophical elite. The movement has made its way into our culture, even if we haven’t realized it.

For example, it is believed that “Seinfeld,” one of the most beloved sitcom shows of the century, is a manifestation of nihilism in television. It makes sense if you think about it. “Seinfeld” is a show about nothing, and each episode revolves around an absurd plot and the characters’ ironic humor.

So here’s your argument when your parents inevitably question why you would want to go to the Nihilist International Film Festival. You can tell them that you’re old enough to decide for yourself, and argument that may or may not cause them to threaten to take your allowance or PlayStation or any number of things.

Or you could be the adult you claim to be and repeat the aforementioned history of nihilism, as well as modern applications of the belief system, which, in all fairness, isn’t too radical these days. Because in our postmodern world, who isn’t a nihilist?

So now you’re allowed to go. What now?

The 11th Annual Nihilist International Film Festival program includes two hours of short films from around the world, and no subject matter is excluded. Funny, disturbing, profound and shallow – everyone will find something they enjoy, although you may want to leave small children at home.

This is not just an excuse for people to pretend they know what they’re talking about just to put on the façade of being an intellectual. Nihilist Film Festival director Elisha Shapiro is an active nihilist.

He was the Nihilist Party candidate for Governor in 2006, for President in 1988 and for LA County Sheriff in 1992. He also presented the 1984 Nihilist Olympics and the 1999 Nihilism Expo. Needless to say, we are in good hands at this festival.

Going back to those “Seinfeld” allusions, remember the show’s anti-holiday subplot called Festivus? It was all about “airing grievances” you have with your loved ones, and it featured a metal pole in lieu of a Christmas tree.

Well the Nihilist International Film Festival is having their tradition called Blessing of the Televisions. If you bring your television 15 minutes before the festival begins, your appliance will be able to take part in the ritual.

Here’s the kicker. Admission is only 99 cents because Nihilists are also aware of our current economic climate. Now you really have no excuse not to go.

This festival prides itself on rejecting the artsy-fartsy, namby-pamby filmmaking that is very prevalent at most other festivals. Their sole goal is to screen absurd, crazy films that are also wildly entertaining.

None of these films will put you to sleep. If they do, you could ask for your money back, but nothing is ever a guarantee. 7:30 p.m.