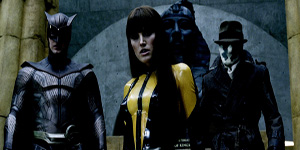 Imagine if Watchmen was turned into a series where each chapter could have its own episode.
(Credit: Courtesy of Warner Bros. Pictures)

Have you ever watched a movie based on a book and thought the book was better? I’m going to assume you have. That sentiment is always going to be present when discussing a film adaptation of a popular book. My instinct is that the reason people feel that way is because the narrative structure of films and books are so dramatically different.

Prose allows the writer to use as much time and space as he or she needs to set up, develop, unravel and communicate his or her story. A screenplay for a film, on the other hand, has to fit into a set amount of pages and has to accomplish a checklist of things that are consistent with the structure of film, alone. When a book is adapted into a screenplay, a lot of truncating, combining, tweaking, reworking and amalgamation takes place that can often pull the story and the characters away from what was intended by the original author.

In no way is this a criticism of any filmmakers charged with this task, because many have done it brilliantly, but there are also many films based on books that did not come out so well. When words become visuals there’s a translation process that can and will alter the material for the better.

Obviously, not every detail can translate to film. When talking about The Godfather, Francis Ford Coppola mentions that the reason the opening credits read “Mario Puzo’s The Godfather” is because he wanted to do a true adaptation of the source material.

However, not all films can be three hours long. Peter Jackson’s The Lord of the Rings film trilogy is hailed as a fantastic adaptation of its source material, but he had nine hours to work with, and that whole project was a once in a lifetime gamble.

So here’s my musing: Instead of developing every book for film, why not start developing some for primetime cable networks like HBO and Showtime? Instead of turning the book into a film, turn it into a series.

Reading a book is an epic experience that takes time, and some stories are so epic and sprawling, they deserve more than two hours to visually unfold. They way I figure it is if the book is a bestseller, then why do you have to chop it up and change it around? If it ain’t broke, don’t fix it, right?

I think a good example of this could be Alan Moore’s Watchmen. Even though I really enjoyed Zack Snyder’s adaptation of the popular comic and thought he and the writers did a great job of getting most of the story in, the film pushed three hours, and not everyone responded to it.

Imagine if it was turned into a series where each chapter could have its own episode. When people read books they create their own visuals in their minds, and everybody’s is different. But if you could create an experience that narratively brings the experience of reading the book onto the screen, I think a lot of people would respond to it. I’m not talking every book; just the books and series of books that are too large for the limited canvas of theatrically released films.

When a series of books is adapted into a series of films, the installments vary where some are truer to the books, while others are not and leave the audience with a feeling of unevenness.

Stephen King’s brilliant The Dark Tower series is definitely not one I would want to see turned into truncated films that at best preserve the essence of the books. The same could be said for films based on the lives of iconic people.

The HBO series based on the life of John Adams starring Paul Giamatti was excellent and had great production values. And then after the series is done airing, you could buy the whole shebang on DVD and sit and watch it straight through like you’re reading the book.

I’ll let everyone in on a little secret: I’ve already selected a book that in the future I will turn into an epic primetime cable series. It was already adapted into films, and the films in no way captured the emotional and visceral scope and magnitude of the book.

Unfortunately, I’m not going to give away the name of the book, so you’ll just have to wait and see. Until then, I encourage anyone and everyone to give it a shot.