Bruins Bank on the Eagle and the Owl 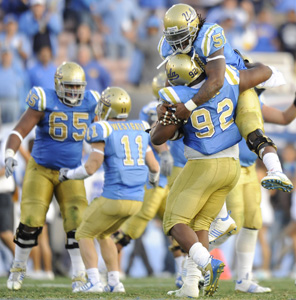 Football fans in Westwood were rooting against the Army last weekend. The Bruins wanted to play one more football game this season, and it would take an Army loss to make it so.

Before one accuses UCLA of being unpatriotic, the Bruins were rooting for Navy.

Of course, one can accuse a select few at the Westwood-based university of seeking a bowl game berth later this month just for the sake of earning a few extra dollars.

Turns out, everyone at UCLA got their wish. Bruin head coach Rick Neuheisel told the Los Angeles Times: “We’ve reached our goal.”

And just what is that goal? At face value, the goal was to make a bowl game, of course.

With Navy defeating Army, 17-3, last weekend in Philadelphia, the Bruins booked a few plane tickets to Washington, DC, to face off against the Owls of Temple in the second-ever EagleBank Bowl on Dec. 29. What we now have is a game between two non-traditional bowl teams in a non-traditional bowl city sponsored by a not-so-well-recognized financial institution.

Temple is playing in its third-ever bowl game; the Owls also played in the 1935 Sugar Bowl and the 1979 Garden State Bowl. The Bruins have a spotty bowl history, losing eight of their last 11 bowl games since 1993.

Accordingly, the question is whether anyone really cares about this game beyond the friendly confines of each school’s respective campuses. How many college football connoisseurs are going to halt their end of the year festivities to rush to a television to watch this game on ESPN?

That is what happens with 34 bowl games on the calendar – the only ones who care passionately about the games are the participating schools. Sure, there are the major bowl games that attract even the most casual of audiences, such as the Rose Bowl or BCS National Championship Game (this year featuring powerhouses Alabama and Texas). Yet, outside of UCLA and Temple, who really cares about the EagleBank Bowl?

Of course, neither school will complain about the payout each will respectively receive just for showing up. Not to mention, EagleBank is probably happy it will have an audience in Los Angeles and Philadelphia, the second and fourth largest media markets, respectively, tuning into ESPN on Dec. 29.

So schools and sponsors have some tangible benefit (Temple head coach Al Golden told the Los Angeles Times, “This means everything to our kids”), but will anyone else really be bummed if this game doesn’t happen?

At last count, there are 34 scheduled bowl games this year. That means 68 teams qualify for the postseason this year, with only 120 teams in the NCAA Division I Football Bowl Subdivision eligible to compete for bowl games.

Let us do the math – 68 of the 120 colleges in what was previously called Division I-A football found their way to a postseason game to a bowl game this year. Put in another way, about 57 percent of football programs are making holiday plans to take the field for the right to claim a “bowl championship.”

Papajohns.com Bowl anyone? Who wants to brag about the Meineke Car Care Bowl? Let us all take a break from life and head over to the Beef ‘O’ Brady’s St. Petersburg Bowl.

Yes, it is nice to have college kids playing in a bowl game during the holidays, while the school makes a little extra cash along the way. Sure, businesses are entitled to try to brand their respective products via bowl game sponsorship.

Yet, at what point does this qualify as oversaturated? When will we have just one bowl game too many?

Moreover, when does it stop being about the very kids who take the field? When does the bowl game system become less about those young ones who sacrifice their bodies on the field and more about the financial payout for the schools – money that the student-athletes will never see?

Oh well, I just hope there is plenty of good food to go around at the upcoming Little Caesars Pizza Bowl.

The Sports Wanderer
Welcome to the Pacific-12
44,472 views

The Sports Wanderer
Gagne With the Wind
1,993 views

The Sports Wanderer
Godzilla Dons Halo in The Bronx
2,105 views

The Sports Wanderer
Jerry Busses to the Famed Hall
1,941 views

The Sports Wanderer
Get Rid of the Clippers
2,411 views

The Sports Wanderer
A Bleeding Heart for Vinny
2,801 views

The Sports Wanderer
No Angels In This Bracket: 2010 March Madness
1,950 views

The Sports Wanderer
Kobe Opting Out of Los Angeles
1,950 views

The Sports Wanderer
The Golden OC and the Silver L.A.
2,764 views