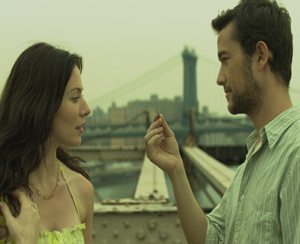 If you’ve ever lived in New York, Uncertainty will immediately spark a sense of longing for delicious pizza, hot summer nights and walks across the Brooklyn Bridge with a sizzle of excitement in the air. This new film by writer-producer-director duo David Siegel and Scott McGehee takes you right into the heart of it.

It’s the 4th of July, and Bobby (Joseph Gordon-Levitt) and Catalina (Lynn Collins) begin the film in the middle of the Brooklyn Bridge. You see them wavering about a decision, then Bobby pulls out a coin and flips it.

One story takes the couple to a family barbecue in Brooklyn where questions of love, family, principles and ethical behavior come into play. The other story leads them into Manhattan in the back of a cab where they find a lost cell phone. In their attempts to get the phone back to the rightful owner, they land in a sea of danger, dodging death threats on an adventure in Chinatown.

This film is so griping it reminds me of great films like Sliding Doors and Run Lola Run. Drastically different outcomes can develop from simple moments and choices in daily life. The filmmakers were able to juxtapose the peace and serenity of one timeline against the chaos and confusion of the other.

The film is aptly titled as both experiences have moments of uncertainty. The chemistry between the two leads, and the supporting cast, really brings this film together.

Uncertainty is currently in theaters.