Taking A 'Break-cation': How to be Both Spontaneous and Savvy 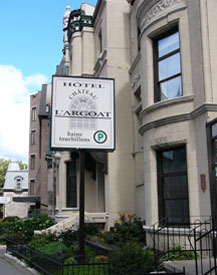 Montreal for the weekend?

The idea drew smiles and a few raised eyebrows when I mentioned it to friends and colleagues.

Most of us feel as if a three- or four-day weekend is enough time for a getaway in the Northwest or to San Francisco or Palm Springs.

But what if your heart’s set on Chicago, New Orleans, New York or ... Montreal?

If grabbing a week or two away from job and family isn’t possible, can you really throw together some last-minute plans, fly across a few time zones and get back home three days later without feeling as if you’ve confused running a marathon with taking a vacation?

Expedia.com calls these types of getaways "break-cations," a term it coined to describe what it says is a nationwide trend toward last-minute, short-spurt travel. One indication: Twenty-five percent of those responding to a May Harris survey commissioned by Expedia said they planned to take their vacation over long weekends versus weeklong or two-week trips.

"What we found is that the two-week vacation is pretty much extinct," said Expedia spokeswoman Kari Swartz, citing a survey by the Travel Industry Association that found 30 percent of Americans taking five our more weekend trips in the past year.

"People are looking for the short flight and the really big experience," Swartz said.

Online vacation packages – deals that bundle rooms and flights in one click of the mouse – are making this kind of budget jet-setting easier as airlines, hotels and cruise lines look for new ways to sell unsold seats and rooms at the last minute.

Can these deals save you money? Sometimes, but they’re really more about convenience. Rarely will you find screaming bargains. And the tradeoffs (inconvenient flight times, non-refundable tickets, pay-in-advance rules, rooms in chain hotels) may not be worth it given what you could find on your own with a few phone calls or an Internet search.

"In some cases, there are certainly some genuine bargains out there. I always suggest consumers take a look at them, but they usually come with some caveats and the restrictions are fairly heavy in terms of cancellations and changes," says William McGee, a consultant for Consumer WebWatch, a division of Consumers Union, publisher of Consumer Reports.

McGee’s advice is, if you’re going to take a trip like this, take 20 minutes to do some mixing and matching yourself.

My own rule of thumb is to find the best airfare you can for the dates you want to travel, then subtract that amount from the package price. The difference is what you’ll be paying for the hotel. If you’re satisfied, fine. But if you’ve got the time, see if you can do better.

Start by using a search engines such as www.mobissimo.com, www.farechase.com or www.qixo.com that scan the airline and travel Web sites, or get an idea of prices, flight times and connections on Expedia, Orbitz or Travelocity.

It’s likely that you may find the best deal on the airline’s own Web site or through a discount travel agent. Airlines have done away with 14-day advance fares in many instances, and most post weekly cyberdeals on their Web sites for travel within the next week or two.

Alaska Airlines, for instance, offers weekly "Web specials" for departures on Wednesday, Thursday and Saturday of the current week and returns on Saturday or Monday and Tuesday.

One way to save time searching for last-minute fares is to check www.smarterliving.com, or sign up for its e-mail newsletter listing all weekly Internet specials.

When it comes to hotels, "blind" bookings made on Priceline.com and Hotwire.com can produce some last-minute bargains.

These sites let you to choose the general location and type of hotel, but you won’t find out the name until your offer is accepted and your credit card charged.

If you’re more comfortable picking your own hotel, don’t jump at the offers on the travel booking sites without also checking the hotel’s Web site and calling the hotel directly. AAA, AARP or corporate discounts might beat the hotel’s Internet rate.

Reserving directly has other advantages: You avoid the pay-in-advance, cancellation fees and restrictions that come with booking through a third-party site.

If you do use one of these sites, keep in mind that their rates can vary for the same hotels and dates, and no one site consistently offers the best deals.

I found a mix of rates for the four-star Hotel Omni Mont-Royal in downtown Montreal when I checked recently on the cost of a Friday night stay.

The Omni’s Web site listed a price of $158 (based on current exchange rates) including taxes. But I found the lowest rate ($142.57) by calling the hotel and asking for a AAA discount.

Chances are I could have done even better by bidding on Priceline. Two travelers who posted reviews on www.tripadvisor.com revealed that the Omni accepted bids of $80 and $90.

When it comes to vacation packages, shop around and compare deals on several sites.

Expedia added a new feature telling you how much you save by booking a package (air and hotel) vs. buying each one separately on its site. Ignore claims of "unbeatable bargains" and "savings of up to 70 percent," and pay attention to words such as "from" as in "from" $599 (meaning the price if you share a room with a partner, take a red-eye flight or stay in an out-of-the-way hotel), and "total," meaning you’re being quoted the final price including all taxes and fees.

Having a hotel in a convenient location is essential for a short trip. If you’re unsure about the neighborhood or the hotel itself, check out what others have to say at www.tripadvisor.com or www.virtualtourist.com.

Find out if the package deal is for one person traveling alone or for two sharing, and check if it credits you with frequent flyer miles.

Read the "Rules and Restrictions" and "Terms and Conditions" sections on the online booking sites.

Priceline.com states that in "most cases," vacation packages can’t be changed, cancelled, refunded or transferred.

Site59, owned by Travelocity, stipulates that all purchases are final.

Expedia’s policy is more liberal – packages can be canceled according to the rules of the individual airlines and hotels. You can, for instance, for a fee, cancel the hotel without canceling your flight or, change (but not cancel) your flight.

Keep in mind that the more last-minute the trip, the better the value a package deal usually is.

"These packages, as prettily as they’re dressed up, are basically distressed inventory," says McGee. "It means ‘we’ve got rooms and the weekend’s coming up. Sell, sell sell.’"

So do your homework, shop around, but once you’ve booked, don’t look back. Your work is done. Get some rest. Soon it will be time to play!