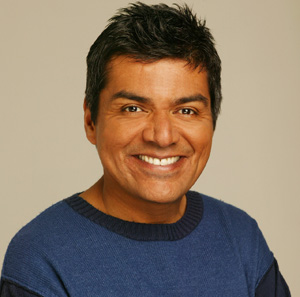 George Lopez on DVD, on TV (“Lopez Tonight”) and on stage at Nokia Theatre this month.
(Credit: Comedy Central)
OK, so there is nothing wrong with George Lopez calling himself “tall.” Heck, he can even call himself “dark.” Considering his ethic roots, sure, boasting the “Chicano” in him is allowable.

Alright, maybe Lopez is not really that misguided in titling his latest DVD Tall, Dark & Chicano, but must he be so loud about it?

In the phenomenon that is the stand-up comedy of Mr. George Lopez, one thing has become evident – the hugely popular entertainer likes to use his loud mouth to poke fun at the size of his head while simultaneously chiming in on how he feels about his fellow Mexican-Americans. If Lopez were not so over-the-top energetic with his shtick or delivery, would he be the entertainer that we have all come to know and love?

Love him or hate him, that over-the-top loud delivery is what got 14,000 people to pack the AT&T Center in San Antonio – the crowd full of adoring fans who laugh out loud for about 90 minutes as Lopez mockingly targets everything from Sarah Palin to AIDS.

In almost boldly going where no man has gone before, Lopez spares no one in his latest stand-up routine, well chronicled in /i>Tall, Dark & Chicano. Naturally, Lopez targets politicians and celebrities – easy fodder for any stand-up comedian, the perfect material for audiences to relate to – but with a Latin twist. For example, Lopez tells his audience that Brad Pitt, Barack Obama and Sarah Palin all have a little bit of Hispanic blood in them.

Not sparing the children, Lopez explains why young Latinos have no fear – drawing gut-busting, stomach-hurting laughter from the audience.

The audience is engrossed throughout his set, as he comments on a slew of everyday issues, from flat-bottomed tacos to why Latinos are immune to modern weapons employed by law enforcement officials. Lopez’s near-aneurysm on baby-proofed houses is quite the rousing delivery as well.

Yet, where Lopez’s stand-up routine really stands out is in his Chris Rock-like profanity-laced section on sexual issues, touching on individual frustrations as well as AIDS. He even gets into sex and aging.

Tall, Dark & Chicano is ultimately hard-hitting stand-up comedy presented in the vein that only George Lopez can deliver. It is the complete version of the man who had to (naturally) tone down his comedy for network (ABC’s “George Lopez”) and cable television (TBS’ “Lopez Tonight”).

Speaking of “Lopez Tonight,” it appears the Tall, Dark & Chicano comedian has joined the wave of entertainers who are hosting a late-night, stand-up-routine-based variety television show on a non-network channel. After all, who said only CBS, NBC and ABC could have hosted programs featuring the likes of Jay Leno, Conan O’Brien, Jimmy Kimmel or David Letterman, right?

The late-night talk show launched on TBS Nov. 9, making Lopez relevant on television again for the first time since “George Lopez” went off the air and into Nick at Nite syndication in 2007.

Airing each week, Monday through Thursday at 11 p.m., Lopez is the first Latino host of a late-night talk show on an English-language network (cable or otherwise). Just like his DVD, Lopez’s delivery is intensely energetic and substantially audience-centric, with a high degree of interaction between audience and host.

It is that interaction that makes Lopez an intriguing destination for late-night talk show audiences. Helping Lopez connect with the night owl masses is a hefty dose of A-list celebrities visiting his show, including the likes of Ellen DeGeneres, Eva Longoria Parker, Kobe Bryant and Carlos Santana appearing on the debut show.

If he can keep the larger-than-life jokes running and big names coming, Lopez should remain competitive in what has now become a saturated late-night television show market.

Of course, there is only so much Lopez can do on television. In order to see him in full swing, grab a copy of Tall, Dark & Chicano or try to catch one of his live shows at L.A. LIVE’s Nokia Theatre before 2009 ends.