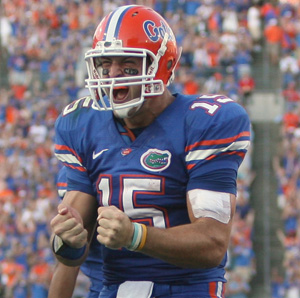 Even though the Utes have won eight consecutive bowl games (including the Sugar Bowl upset over Alabama last season), they will have their hands full if the Bears’ running back Jahvid Best is back on the field. Best began the season as an early Heisman contender but missed three games after being knocked unconscious and sustaining a concussion Nov. 7 against Oregon State. PICK: California

The Bobcats played their final game of the season at Ford Field (losing the MAC championship to Central Michigan 20-10), but make their first appearance in this Pizza! Pizza! matchup in hopes of the program’s first-ever postseason win. A brand new coach leads Marshall’s Thundering Herd, due to Mark Snyder’s resignation Nov. 29. PICK: Ohio

This is the first time former Jimmy Johnson protégés Dave Wannstedt and Butch Davis take to opposite sidelines, coaching the Panthers and the Tar Heels, respectively. Look to Wanny’s squad to seek redemption after their season end heart-wrenching losses to West Virginia and Cincinnati, but they must get by UNC’s top-10 defense. PICK: North Carolina

Oh how the mighty have fallen. But maybe the Trojan’s fall this season (the first since 2001 with USC not appearing in a BCS bowl) will earn the rest of the Pac-10 teams the respect they deserve. If Pete Carroll’s defense fails to stop the Eagles who are 97th in total offense (out of 120 teams) and 71st in scoring, this might not be the last disappointing season for SoCal fans. PICK: USC

The Wildcats make their third Music City Bowl appearance in four years and hope to win their fourth consecutive postseason game. ACC player of the year, running back C.J. Spiller (1,145 yards, 11 touchdowns) and the Tigers look to dash those dreams for Kentucky. PICK: Clemson

While the Bruins are just happy to be playing in the postseason, this is the Owls’ first bowl since 1979. All eyes are on Temple’s freshman running back Bernard Pierce (1,308 yards, 15 touchdowns), who missed the final two games of the season but is expected to return from a shoulder injury. PICK: Temple

The Badgers return to the same bowl as last season, but their level of aggression – especially on defense – has definitely intensified. If they can put the pressure on ’Canes quarterback Jacory Harris (17 interceptions this season) and make sure that John Clay gets his hands on the ball, they have a chance. PICK: Miami

Ndamukong Suh – if you don’t know how to pronounce the Heisman finalist’s name, you better learn. The senior defensive tackle and the Cornhuskers will try to humble the Wildcats, who drew the bowl bid after their 21-17 season-ender defeat of the Trojans, in this rematch of the 1998 Holiday Bowl. PICK: Nebraska

The Cougars and the Falcons meet again this year, in the same exact bowl. Houston’s Case Keenum leads the country with the No. 1 passing attack (419.2 yards per game), and Air Force is third in rushing yards (273.6 yards per game). Should be quite the high-scoring game. PICK: Houston

Sigh, poor Sam Bradford. Think of where the Sooners would be if he had stayed healthy. The Cardinal make their first bowl appearance in eight years with Heisman finalist Toby Gerhart (1,736 yards, 26 TDs) looking to run all over Oklahoma. PICK: Stanford

Tigers receiver Danario Alexander is top in the country with 137 receiving yards per game. But the Midshipmen offense, helmed by Ricky Dobbs, might be on the field for most of the match. PICK: Missouri

This could be the lowest scoring game in the lot this postseason. The Cyclones are 102nd in scoring, while the Golden Gophers are 113th. Yikes. PICK: Iowa State

While an NCAA investigation looms over Tennessee for recruiting violations, two standout running backs – the Hokies’ Ryan Williams (No. 3 in the nation with rushing yards) and the Vols’ Montario Hardesty (averaging 108.8 yards per game) – go toe-to-toe in Atlanta. PICK: Virginia Tech

The Wildcats haven’t won a bowl since 1948, so they’re hungry. They finished their regular season with a strong statement – upsetting Iowa and Wisconsin. However, the Tigers showed spirit in their battle against the Crimson Tide Nov. 27.PICK: Northwestern

The Tigers have won five of their last six bowl games, but never count JoePa out! College football’s winningest coach goes for No. 394. PICK: LSU

Speaking of coaching legends, Bobby Bowden takes his final bow with the Seminoles against the Mountaineers, whom he coached from 1970 to ’75. PICK: West Virginia

With USC’s absence, could a Big 10 team take the Granddaddy of Them All for the first time since 2000? Buckeye quarterback Terrelle Pryor is great both in the air and on the ground, but his defense will have its hands full with the Ducks’ LaMichael James, LeGarrette Blount and Jeremiah Masoli. PICK: Oregon

In his final game under center for the Gators, 2007 Heisman winner Tim Tebow pulls out all the stops, attempting to regroup after getting swept away by the Crimson Tide. But expect the Bearcats to put up a valiant effort – even though Brian Kelly abandoned ship for South Bend, this has been their best season yet. PICK: Florida

The Bulls lost five of their last seven games, but they’ve been in a bowl five years in a row. This is the Huskies’ first time making it to the postseason in consecutive years. Blah, still a snoozefest. PICK: Northern Illinois

UConn tries to capture their first-ever win over an SEC opponent. Steve Spurrier and his Gamecocks crawl into Alabama having lost four of their last six matches. PICK: South Carolina

Both teams lost their big rivalry games this season (the Cowboys to Oklahoma 27-0, the Rebels to Mississippi State 27-41), so you have to wonder how high either team’s motivation is to have an explosive performance. PICK: Mississippi

One of the best QBs in the SEC, Razorback sophomore Ryan Mallett (3,425 yards, 29 touchdowns) is going to have a stellar game over the Pirates’ less than stellar defense. PICK: Arkansas

It’s a miracle Michigan State has any players to put on the field – several are suspended due to an on-campus altercation. Surely, Red Raiders coach Mike Leach has a lot to say about it (When does he ever hold his tongue?). Spartan linebacker Greg Jones (No. 3 in the nation with 140 tackles) will try to represent against Tech’s offense led by Taylor Potts. PICK: Texas Tech

In a rematch of last season’s Poinsettia Bowl, one of the country’s best passers (Bronco Kellen Moore) against the Horned Frogs’ best defense in the nation. This matchup represents the first time two unbeaten teams go head-to-head in a BCS bowl other than the championship game.PICK: TCU

The Hawkeyes haven’t played since Nov. 21, so they’ve had plenty of time to prepare for the Yellow Jackets’ spread option offense that is No. 4 in the country with 5,755 yards this season. PICK: Georgia Tech

Who says 13 is an unlucky number? The legacies of these two undefeateds are rich in football history, and this game is going to live up to those high standards. Nick Saban versus Mack Brown. Colt McCoy (leading passer in school history, Heisman finalist two years straight) heads the strong Longhorn offense, while 2009 Heisman winner Mark Ingram is the top single-season rusher ever for the Crimson Tide. PICK: Alabama
Article posted on 12/21/2009
This article has been viewed 1506 times.