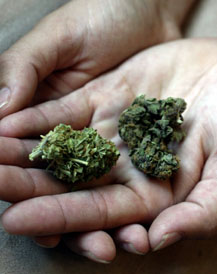 Five water bongs, a beaded curtain illustrated with a marijuana leaf and a poster of Bob Marley on the apartment wall smoking a joint make it clear what the young couple living here thinks of cannabis.

Andrew Ronquillo, 20, and his fiancee have letters from a medical doctor saying their ailments may be treated with cannabis. Ronquillo smokes to relieve pain from a once-shattered right wrist. His fiancee Ashlee Sandlin, 19, partakes to alleviate a mild pain in her knee, insomnia and a lack of appetite.

"If I don’t use the medicine," she said, "I get a nauseous feeling."

Ronquillo, Sandlin and friend Jordan Flemings, 19, want others to be able to alleviate their pain. A week ago they set up Peaceful Primary Caregivers as a medicinal marijuana dispensary and started delivering cannabis to patients throughout Orange County, Calif.

The move plops them in the middle of a legal tug-of-war that could heighten this summer with a U.S. Supreme Court ruling.

Such dispensaries are against federal law, but California voters in 1996 approved Proposition 215, legalizing medicinal marijuana for those with a doctor’s approval.

The trio has a Web site, has written up a nine-page business plan, and has approached Lake Forest, Calif., about opening a facility there from which marijuana could be sold and deliveries made. They intend to draw salaries from the dispensary and within a month begin the steps to acquire nonprofit status for Peaceful Primary Caregivers.

Ronquillo said the group’s true aim is to open a dispensary in Mission Viejo, Calif., where he and his fiancee live. But they intend to approach all 34 Orange County, Calif., cities.

"I plan on submitting [proposals] to every single city in the county to force them to deal with it – to do something for us," he said, sitting in his tidy apartment.

"To treat us as any other normal people. That’s our goal in the next three months. South county first – the area I live in. I want to help my community."

Peaceful Primary Caregivers, like other medicinal marijuana dispensaries, requires customers to have a letter from a medical doctor saying they might benefit from marijuana use. Peaceful Primary intends to distribute cannabis or its derivative in lollipops, cookies, brownies, buds and even topical lotion.

Cities, realizing the movement is gaining popularity here, are responding. In March, Huntington Beach, Calif., established restrictions, prohibiting dispensaries from setting up shop within 500 feet of schools, parks and recreation centers. Last month, Lake Forest set a 45-day moratorium on new dispensaries and is expected to consider extending that for an additional 10 months, in part because of the muddy legal waters.

Such a move would allow the city time to study how to handle any requests for the dispensaries.

"That is one of the key issues – the conflict between state and federal law," said Assistant City Manager Mark Pulone. "That is one of many issues that have to be resolved here."

Mission Viejo Councilman Lance MacLean said he would favor a moratorium as well to buy time until state and federal law are in agreement. He said he could see medical marijuana dispensed out of a pharmacy like any other medication requiring a doctor’s approval.

If sheriff’s deputies come across a medicinal marijuana dispensary, they would confiscate the marijuana, conduct an investigation and leave it to the District Attorney’s Office to determine if the dispensary is in compliance with the law, said Jon Fleischman, a sheriff’s spokesman.

Bob Jones, the assistant district attorney who oversees the office’s major narcotics unit, said any case on the legality of a dispensary would be judged on its individual merits.

"We’re not going to at this point give any legal opinion on that issue," Jones said. "We are interested to see what the Supreme Court is going to do."

Peaceful Primary Caregivers gets its marijuana from people who are allowed to grow it under the state proposition because they also have a doctor’s letter.

When new patients want to buy marijuana, they must show the doctor’s original letter; most such letters have a special seal. If there is any doubt, one of the members of Peaceful Primary Caregivers calls the doctor’s office to verify the patient qualifies. Then the deliveries are made.

"Why should we be treated as second-class citizens?" he said. "I don’t see myself as any different [than] if you have a prescription for Vicodin."

California cities are handling the conflicting state and federal laws in various fashion:

Los Angeles Councilman Dennis Zine asked the Police Department and the City Attorney’s Office last week to study whether the dispensaries, also called "cannabis clubs," are operating within the law and if specific zoning requirements should be enacted for them.

Fresno Americans for Safe Access filed a lawsuit against the city last month over a municipal law limiting dispensaries to two patients.

Costa Mesa: The Planning Commission is scheduled on Monday to review a proposal that would prohibit the dispensaries.

San Francisco: A supervisor has requested the city’s moratorium on new marijuana dispensaries be extended so specific rules can be drawn up. There are reportedly more than 40 such dispensaries in the city.