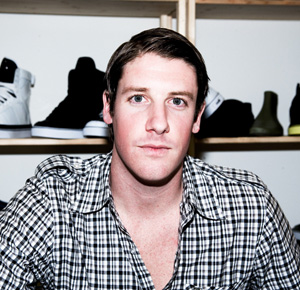 What’s a sneakerhead to do when all they can think about day in and day out is shoes? Should you start up a brand new company when the economy is on the decline and it’s still looking a little bleak? Well, Casey Arisohn did just that.

Incorporating years of past experience and knowledge as a buyer in the fashion business, Arisohn founded and launched his own company of progressive footwear called Radii (pronounced ray-dee-eye) in August of 2008.

Arisohn is one of the most ambitious 26-year-olds out there. A native of Southern California, he grew up in Huntington Beach – Mecca of outdoor living, from land to water. He started working at the infamous Jack’s Surfboards shop when he was just 16.

“Every paycheck that I earned would go towards what I eventually envisioned as my own company,” he says.

Arisohn was always in love with sneakers and constantly looking for what was fresh and hot.

“I was always that guy who had a pair of sneakers to match every outfit,” he states, “and still to this day there are unopened boxes in my closet that may never get opened.”

He has always been inspired by some of the larger brands like Nike and Adidas, now his competitors, but was always aiming for something higher end. He knew that he couldn’t come out the box and compete with the big wigs, but he had a vision of creating urban, high-design footwear.

Although Arisohn sees his shoes as art, he knew that he had to “create a shoe that customers would get, and that had a functionality and creativity but would sell.”

He had to develop a different business plan than his competitors, yet design something people wanted to put on their feet. His shoes are a blend of different fabrics, ranging from leather, patent leather, suede and nubuck to cloth, and mix bright colors with subdued tones and animal prints. The price range is exactly on point from $90 to $120.

Arisohn has been a student in the business of shoes for years.

To date, he states, “I have over 7,000 pairs of shoes saved on my computer that I go over before I create a new line. I’m constantly on the sneaker blogs, reading articles, at trade shows and on the phone with my people asking what is hot. Just trying to get a grasp of what my customers want.”

His 420 Tops are his most popular shoes.

“Without them, I wouldn’t be in business,” states Arisohn.

A few notable celebrities have taken note of his designs from the Black Eyed Peas, Gwen Stefani, Day26, Travis McCoy of Gym Class Heroes and the trendsetter himself, Jay-Z.

It is actually a great story Arisohn offers about Jay-Z.

Arisohn’s accountant in Brooklyn called him up one day and said that he needed to special order a size 11, per the request of Jay-Z.

“At first I was doubtful. If I had a nickel for every time someone said they had a cousin or a friend that could get a pair to Jay-Z, I’d be rich.”

However, he trusted the veracity of his accountant and said that if it really was Jay-Z, “could you just at least get me a picture?”

Sure enough, a week later he was watching the BET Hip-Hop Awards and Jay-Z was wearing them on stage!

“It was awesome and crazy and made me want to keep on creating and making shoes that people liked!” says Arisohn.

His brand continues to develop fashion forward designs, as well as business casual mature sneakers, that are primarily what Arisohn is rockin’ on his feet right now.

“I needed to develop my brand first with my own unique style before being able to put out what I now see my company heading toward,” expresses the designer.

Arisohn aptly named his company Radii, which is simply a clean and ambiguous name to spark people’s curiosity. He didn’t realize at the time that the name was a perfect fit, and that Radii defined meant “range of influence.”

He has expanded this to mean: “No limit to the fashion and creative styling, and all the opportunities you can reach.”

With his company steadily growing, he plans to continue to create innovative designs that are distinctive and exciting. This will guarantee the permanence of the brand.

All that Arisohn has created is not only impressive and inspiring, but he was able to achieve success on his own terms to boot.