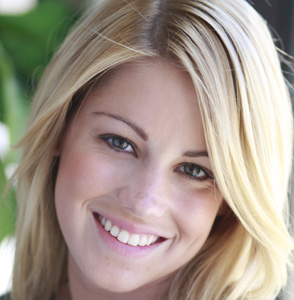 To quote Three 6 Mafia, it’s hard out here for a pimp. But honestly, it’s probably hardest on an actress trying to get that breakthrough role in this industry. Money is success, and success is mostly guaranteed by familiar faces.

However, there is a new show on television that is taking the ratings (and film executives) by the ears and forcing them to listen to the sweet sound of audience approval.

“Glee” is the biggest newcomer in FOX’s lineup, but creating those dance sequences isn’t as easy as it looks. Take it from someone who has an extensive background in dance and who starred in several episodes this season.

“It was the hardest job I’ve had so far because running up and down risers in heels is not as easy as it looks,” says professional dancer and aspiring actress, Audra Griffis.

And with a name like that, how can you not hire her? Griffis isn’t doing this stuff just for fun. She’s serious about joining the elite club of admired actors alongside her favorite thespian.

“I love Rachel McAdams,” says the Toledo, Ohio-native. “Her transition from Mean Girls to The Notebook shows her talent as an actress. She has this hometown girl vibe, and she is so well respected. She is one of those people in Hollywood who is a great actress but not a socialite.”

Like all stories go in the town of casting calls and audition reels, you don’t just make it big over night. In fact, Griffis has been working toward this since she was hardly able to walk.

“My mom put me in dance when I was 3 years old,” reveals the dedicated 20-something. “I grew up in a studio. After I graduated high school I toured with a group of dancing teachers. Four and a half years ago I moved out to L.A. with my best friend, and I just started teaching dance this year.”

It is through dance that she is still making connections in Hollywood. Griffis recently toured with High School Musical star Vanessa Hudgens, which she describes as “the coolest experience. She’s such a nice person. We went to Six Flags a lot. Just being on the tour bus with her was so much fun.”

The singing and dancing is what has made “Glee” and HSM so popular, but Griffis is looking to ditch the teeny bopper stuff. Actually, she’s extremely serious about acting seriously.

“I love dancing, but there is absolutely no longevity in the career,” she says. “And the pay isn’t good. I want a long-standing career.”

What’s the hardest part about this business? Is it the long hours, the constant rejection, the fierce competition? For the down-to-earth girl who still goes home to see her parents at least four times a year, it’s a matter of forcing herself into the spotlight.

“I’m a shy person,” admits Griffis. “The hardest thing I’ve learned is just putting myself out there. I don’t want to be another one of those girls who go up to producers, beg for roles and exploit myself. I want to build a career on my own. But being alright with marketing myself is what I’ve learned I have to do.”

Following in the footsteps of stars like Natalie Portman and Emma Watson, Audra Griffis is also continuing her education. She is a part-time student at Pierce College, and though her schedule does not allow much time for term papers, she makes it work.

“I think it’s very important to have a degree and to have something to fall back on. It’s imperative to maintain your sense of normal. It’s so easy to get caught up in the Hollywood scene. Dancing is my No. 1 priority, so that’s what I have to focus on. It sucks when I have to miss a quiz because of a gig, but it’s all worth it.”