The Wing Girls: Dating Advice Every Guy Could Use 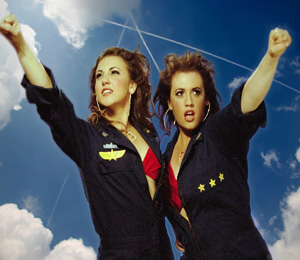 Attention all boys. Have you ever liked a girl that didn’t like you back, but you could never figure out why?

Have no fear, the Wing Girls are here. Star and Jet have done a huge favor to womankind and created an advice service that strictly gives advice to men about dating and women.

The Wing Girls got started when they randomly met at a party and were sucked into one confused man’s Wing Girl needs. At the refreshment table, both Star and Jet found themselves giving advice about women to this man they didn’t even know.

Turns out, he was going about his situation with women completely wrong. Both women realized that this man was probably not the only non-psycho, good-looking, nice guy who had issues getting women. So, they decided to do something about it.

“If we could help one guy at a party, we could reach guys everywhere,” Star says.

Like many girls do, both Star and Jet have found themselves giving dating advice to guys almost their whole lives. They realized that they have pretty good perspective on what boys are doing wrong when it comes to girls.

Men deserve to know the truth about women, and it is Star and Jet’s objective to do just that. They started with a blog that basically ranted about things guys do to turn off girls, like wearing socks with sandals.

With the launch of their Web site and YouTube videos, they have received feedback from people all over the world and have become huge hits in New Zealand, Japan, Greece, Spain and Bulgaria.

They target high school and college-aged men through their mid-20s, but will readily give advice to men of all ages and all statuses, whether single or taken.

For men, commitment is not always easy, but Jet and Star help laser beam fear of commitment out of men’s bodies because deep down every man wants to love a woman. Sometimes it’s hard for boys not to be shallow, to go for someone in their own league or to be direct, and that’s OK because Star and Jet can help.

They work almost every night of the week, Wing Girling for guys at bars and events in Los Angeles. By day, these superheroes give private dating advice, e-mail consultations and work on their upcoming novel, which will be the guy’s version of He’s Just Not That Into You and might beat out Playboy as man’s Bible.

A sneak peek into what one could find on the Wing Girls’ Web site is the Top 5 things they wish guys knew:

1) Call, don’t text. When it comes to a date or following up, it’s so hot when a guy calls. You get to talk. There’s more of a feel for each other. A follow-up text can lead to a relationship full of texting. It’s important to be direct. Call her.

2) Take her out of your dorm room. Do something fun, go to dinner, a movie, walk around, something. Make it obvious that it’s a date; pay for her, kiss her.

3) Date around. Youth is the time to figure out what you like and what you don’t like. Don’t spend four years of college with one person unless you’re sure you want to be with her forever. Don’t sleep around, date around.

4) Be upfront about what you are looking for. If you do not want a relationship, say so. Otherwise, you’re asking for her to be upset when she finds out the hard way. Besides, if you state that you only want to hook up, girls will probably still hook up with you, but at least it’s on the table.

5) Don’t sleep with her unless you want a girlfriend. It’s biological for girls to become attached to boys they sleep with.