Jim Tressel: A Coaching Legend in the Making 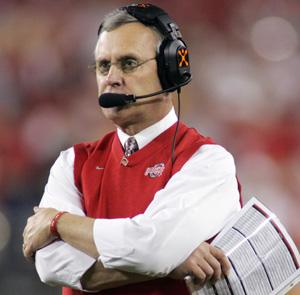 Say his name throughout the nation, and people know him. This is Jim Tressel, the head football coach for the No. 8 BCS-ranked Ohio State Buckeyes.

Tressel’s coaching experience dates back to 1974, when he first acquired a graduate assistant position at the University of Akron. Tressel assisted that program until 1978. He also has had assistant coaching stints at Miami University in Oxford, Ohio and Syracuse University, as well as with the OSU program.

However, it was not until 1986 when Tressel attained his first head-coaching gig. Youngstown State hired Tressel that year, and he remained there until 2001 when OSU named him head football coach.

An Ohio native, Tressel has been the head coach at OSU for nine consecutive seasons now. Tressel, 57, has led the program to a 93-21 overall mark during his career with the Buckeyes. He has reaffirmed that OSU is a national powerhouse, earning six Big Ten championship titles, including five consecutively as of the end of this season.

Overall, Tressel carries a 228-78-2 overall record. In addition to that, he has a 4-4 mark in bowl games. Before hiring Tressel, the school’s football program had somewhat struggled, and they were looking for someone else to restore its reputation.

Immediately after appointing him head coach, Tressel made a lot of noise.

“I can assure you that you will be proud of your young people in the classroom, in the community, and most especially in 310 days in Ann Arbor, Mich., on the football field,” Tressel said during his introductory ceremony in 2001, according to the Michigan Daily.

Michigan is OSU’s most hated rival and beating them is key for the school regardless if they capture a winning season or not. Thus far, he is 8-1 against the Wolverines.

“There’s a reality in life that if you take anything for granted, you’re probably not thinking right. We talk about a lot of things that we shouldn’t take for granted. Maybe some things that aren’t even that real to us, but when you talk about the Ohio State/Michigan game, that’s very real,” Tressel said in mid-November before the game at Michigan, who has struggled the last couple of years, according to OhioStateBuckeyes.com. “So I’d like to think our guys don’t take anything for granted, although I’m sure we all do take things for granted, but this wouldn’t be one of them.”

In just his second year at OSU, Tressel guided the program to an undefeated season and a BCS National Championship title. Then No. 2-ranked OSU finished 13-0 overall and 8-0 in conference play before defeating the then No. 1-ranked University of Miami Hurricanes 31-24 in the 2003 Fiesta Bowl and winning the 2002 National Championship in double overtime. An exciting game it was, indeed, especially because it marked the first time a head coach led his team to a 14-0 season in NCAA Division I-A history.

On another bright coaching note, Tressel steered the Youngstown State Penguins to four National Championships at the Division I-AA level. They were in 1991, 1993, 1994 and 1997. In brief, Tressel has 23 years of coaching experience.

The numbers do not lie. In fact, they depict how successful Tressel has been in his career. He has 228 career wins, nine national title game appearances, six Big Ten titles, nine bowl appearances and national championships in 1991, 1993, 1994, 1997 and 2002. Tressel has also coached 22 first team All-Americans with the Buckeyes (as of the end of last season).

During his life, Tressel has accumulated numerous awards and honors. The first honor came in 1975 when he was inducted into the Baldwin-Wallace College Athletic Hall of Fame. In 1991, 1994 and 2002, Tressel was named the American College Football Association National Coach of the Year. Moreover, he was the 1993, 1994 and 1997 Chevrolet National Coach of the Year and also received the 1994 Eddie Robinson Award.