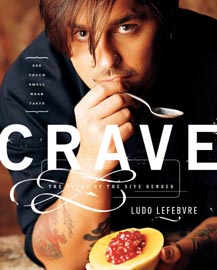 There are some mouth-watering photos in the latest cookbooks from a batch of young, attractive men.

The pictures of the food aren’t too shabby, either.

In Crave: The Feast of the Five Senses (Regan Books, $49.95), Ludo Lefebvre stares back from the pages with a smoldering glance, his frosted hair falling rakishly into his eyes. The two-page spread of him, shirtless, holding a giant fish in each hand as ocean waves lap the hem of his jeans? Now that’s steamy.

Food Network star Tyler Florence goes for a more casual style in Eat This Book (Clarkson Potter, $32.50). On the cover, he’s carrying grocery bags on a hip urban street, looking like he accidentally threw on the perfect clothes for a rumpled chic vibe.

If you prefer the boy-next-door type, there’s Dave Lieberman, the 25-year-old whiz kid behind Young & Hungry (Hyperion, $22.95). With his polo shirts and wide grin, he’s the kind of guy parents hope their college-age daughters bring home for vacation. The fact that he can make brunch is merely a bonus.

Selling products with pretty faces is a time-honored marketing strategy. Yet for the longest time, expert chefs were stereotyped as either old, portly or balding. You know, a combination of Chef Boyardee and James Beard.

That image was never really accurate, because restaurants have always been home to a variety of men, some of them eye candy. But it took the rise of TV food stars like Bobby Flay and Jamie Oliver to give male chefs a youthful spin. Nowadays, a celebrity chef is just as likely to be a hunk with a Cuisinart as a gray-haired eminence.

The Food Network has done a lot to change perceptions by making stars out of charismatic male cooks. "Before we came along, you might know a famous chef’s name, but you didn’t necessarily know what he looked like," says Kathleen Finch, senior vice president of programming for the Food Network. "You couldn’t bring him into your living room."

Of course, the culinary scene has plenty of good-looking female chefs, too, like Nigella Lawson. But it’s the young guys who are the flavor of the moment. They’re giving a fresh boost to the sort of chef worship that turns book signings for the likes of Lefebvre or Florence into rock-star events.

Talk to any of the potential pinup chefs and they’ll tell you their work comes first. The photo spreads, the TV shows, the public appearances, those are ways to connect with customers and spread the gospel of innovative eating, they agree.

Plus, they help sell books.

Lefebvre, who’s executive chef at Bastide, a hot Los Angeles restaurant, says the idea behind Crave – appealing to the five senses with a sensual spin on French cuisine – was his. But he gives publishing diva Judith Regan of Regan Books credit for deciding to focus on photos emphasizing his physical appeal.

"She wants to make me look like a model," he says. "Cooking is something sexy. Judith, she sees the food as sexy. She sees me as sexy."

Although Lefebvre, 34, likes the attention he’s been getting since the book’s release this month, he says he’s turned down offers for a reality show. Someday, maybe, he’ll agree to one, but not now. He’s taking time out to promote his book with appearances on shows like "Today" and "The View," but he insists that food remains his top priority.

"My real passion is cooking, it’s not to be naked on the cover of the magazines," he says.

For Tyler Florence, stardom has been a chance to be part of what he calls "the rise of food consciousness."

The longtime Food Network favorite – his shows include "Food 911," "How to Boil Water" and "Tyler’s Ultimate" – says he still has wide-eyed enthusiasm for encouraging people to prepare fresh meals instead of relying on fast food. In Eat This Book, he offers tips from around the world that are designed to help Americans spice up their daily menus.

Tyler’s fans are a devoted bunch. He recently had a book signing in Los Angeles where an estimated 400 people formed a line down the block. Most of them were women, he admits.

Florence says he avoids any marketing that’s too "GQ, smiley, cologne ad image," because "it’s got to be me."

For that reason, he kept an eye on the artistic elements of Eat This Book, including the photos. "The cover photo, it wasn’t an argument, it was a debate," he says, describing how he and the editors looked at more than 100 photos and decided in favor of one that wasn’t a traditional portrait.

"That wasn’t posed in the least," he says, explaining that he was walking back to his house after shopping when the picture was taken. "I’m actually looking to the left because I’m about to get hit by a car."

Celebrity is still new to Dave Lieberman, who learned how to cook from his stay-at-home father and launched a public-access cooking show while he was a student at Yale University.

After graduating in 2003, Lieberman moved to New York City and worked as a personal chef. A few weeks ago, his new Food Network show, "Good Deal with Dave Lieberman," debuted and his new trade paperback, Young & Hungry, came out.

Lieberman says his image is "kind of the guy next door, being accessible, not like it’s a chef who’s a lot more experienced than the person using the book." His goal is to get a young demographic interested in cooking by not being intimidating and concentrating on common ingredients.

"I was kind of plucked into doing this," says Lieberman, talking about the fame that’s built ever since the New York Times wrote about him during his senior year at Yale. "I’m not fighting it. It’s good. ... I don’t get a big ego trip out of it or anything. At times it makes me uncomfortable, but it’s part of the process."

Lieberman says he doesn’t get recognized in the street much, but he’s gotten e-mails from food lovers around his age, many of them young women.

"Those have come in somewhat consistent waves," he says. "I don’t really know what to do about it. I’ve gotten marriage requests. It’s a little scary." It’s his policy not to respond to any messages with sexual content.

For Lieberman, it’s helped to have role models like Florence, Jamie Oliver and Rocco Dispirito, who starred in the NBC reality show "The Restaurant" – chefs who’ve parlayed their personality and skill into many business ventures.

And he’s happy to be on the cover of his own cookbook, smiling and looking straight into the camera in an inviting way. "I like it. I look friendly. I’m glad for it," says Lieberman. "It’s a nice package."

Male entertaining experts are also trying to get in on the act, too.

A new guide to celebrating, The Party Planner (Bulfinch Press, $29.95), has a fondness for photos of its author, David Tutera, wearing a variety of lively patterned shirts. Obviously, the editors are hoping somebody really likes how he looks in vertical stripes.

Sometimes the cult of personality works, sometimes it doesn’t. But you can’t blame a guy for trying, or the fans for responding.

"It’s kind of a sexy combination, a good-looking guy who knows how to cook," says Finch of the Food Network. "It is a fantasy of a lot of women."