Chip Kelly: One of College Football's Most Innovative Offensive Minds 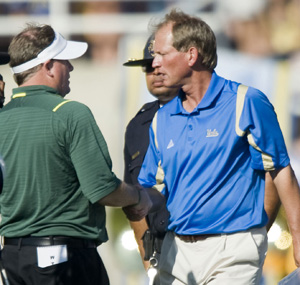 In just one season as the head coach at the University of Oregon, this man has accomplished a lot for the Ducks football program. Yes, Chip Kelly has guided his team to national prominence, not to mention the famous Rose Bowl game on Jan. 1 against the Ohio State Buckeyes.

The No. 7 BCS-ranked Ducks are representing the Pac-10, while the No. 8 BCS-ranked Buckeyes are arriving in Pasadena from the widely revered Big-10 conference. However, Kelly truly does not care about this, as he will have his squad ready to fight on the field come the new year.

A native of Manchester, N.H., Kelly is just 46 years old. Kelly, who was previously the offensive coordinator for the program for two seasons, directed the Ducks to a Pac-10 Championship crown after accumulating a more than respectable 8-1 mark in conference play; the unit mounted a 10-2 overall record for their 2009 campaign. Kelly led Oregon to their first conference title in eight years.

Deservingly enough, Kelly was also awarded the Pac-10 Coach of the Year recognition on Dec. 7.

Such accolades are handed to coaches who have surprising years with their respective teams, but it sure seems more are to arrive on Kelly’s side.

Yes, Kelly is the head football coach at the University of Oregon, but he is still the offensive coordinator for the team. For the entire season, this meant double the work for Kelly, who is regarded as one of the most innovative offensive minds in college football today.

In his first year as offensive coordinator, Kelly incorporated the potent spread offense attack. This formula turned out to be a true success since the Ducks led the conference in scoring at 38.2 points per game and total offense at 467.5 yards per game during the 2007 year.

Unbelievable as it may sound, Kelly and the offense continued this trend in the 2008 season while the Ducks were No. 1 in both categories (41.9 ppg and 484.8 ypg) yet again. The impressive thing about this is that they improved their numbers. Also, during Kelly’s second year, Oregon instituted program usuals for touchdowns (71) and rushing touchdowns (47).

“My philosophy has been to coach an attacking style of football and stretch the defenses in as many different ways as you can,” Kelly said to Oregon’s Sports Information staff upon arriving in Eugene. “You have to get the ball into the hands of your playmakers and let them operate in order to be successful.”

Earlier in the spring of this year, former Oregon head coach Mike Bellotti announced his resignation.

Bellotti is the winningest coach (116 wins) at the school and having the task of replacing such a legend is difficult, but Kelly has proven otherwise. Kelly has made it seem uncomplicated to incorporate himself as the head coach and the offensive coordinator.

The Ducks earned double digit wins this season, and there were some notable victories that are worth mentioning. On Sept. 19, the Ducks defeated then 18th-ranked Utah by a score of 31-24 before beating then sixth-ranked California 42-3 on Sept. 26. Nonetheless, their most prominent victory for the 2009 season came when they faced then fifth-ranked USC, which is a powerhouse in terms of college football. The then 24th-ranked Ducks dismantled the Trojans en route to a 47-20 win, which was televised nationally.

However, in terms of his first year at the helm of the program, Kelly will be forever recalled as the coach who reimbursed a season ticket holder. The season ticket holder wrote a letter demanding a refund for his expenses after traveling to see Oregon’s 19-8 loss to then 14th-ranked Boise State in Idaho Sept. 3. Kelly gained national attention after having done so; he personally wrote a $439 check, but the season ticket holder sent it back with a thank you remark after not cashing it.

On another note, Kelly was named the College Assistant Coach of the Year by the Gridiron Club of Greater Boston following the 2005 season in addition to being selected as “one of college football’s hottest coaches” by American Football Monthly. Kelly spent 13 years with the New Hampshire football program (NCAA I-AA). He earned his B.S. in physical education from that university.

Kelly has performed assistant coach stints at Columbia, Johns Hopkins and New Hampshire. He has been an offensive line coach, as well as one for safeties, special teams, running backs, the secondary and for the entire defense throughout his career.