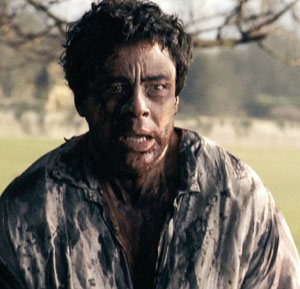 It’s time for my annual Top 10 most anticipated films of next year list. These are the top 10 films that I, personally, am looking forward to. There are lots more films I’m excited about that didn’t make the list, but if I could only see 10 films next year, these are what they would be. The list goes in order of closest to farthest release date.

The Wolfman (Universal; Feb. 12): Although I’m not the biggest fan of remakes, there are definitely some movies that do call out to be remade, and this is one of them. On top of having an awesome cast that includes Benicio Del Toro, Anthony Hopkins, Emily Blunt and Hugo Weaving, it looks like director Joe Johnston has delivered a foreboding and beautiful looking film. The master himself, Rick Baker, who worked on John Landis’ cult classic An American Werewolf in London, did the makeup effects for the film. Although the trailers boast a lot of the computer-generated effects, I’m most excited to see what Baker has done with the practical makeup.

Kick-Ass (Lionsgate; April 16): Matthew Vaughn’s (Layer Cake, Stardust) adaptation of the comic book by Mark Millar (Wanted) is a stylized commentary on superheroes. I’ve been excited about this ever since it was announced that they were doing it. The story follows Dave Lizewski, a nerd who sets out to become a superhero. With all the heavy-handed superhero films that come out every summer, it’s nice to get one that isn’t afraid to rattle the cages.

Wall Street 2: Money Never Sleeps (Twentieth Century Fox; April 23): “Greed, for lack of a better word, is good. Greed works.” Michael Douglas spoke those words in his performance as shady Wall Street tycoon Gordon Gekko back in 1987. The first Wall Street, written and directed by Oliver Stone, was a brilliant film that painted a very unnerving picture of the stockbroker mentality that emerged in the ’80s and helped contribute to the economic quagmire we find ourselves in today. In the sequel, Douglas returns to the character of Gekko, which is enough to get my 10 dollars.

Iron Man 2 (Paramount; May 7): Robert Downey Jr. and director Jon Favreau are back with the inevitable sequel to their 2008 summer blockbuster. Like Pirates of the Caribbean, the first Iron Man was a great example of the benefit of casting a really great actor in a film that would otherwise be basic popcorn fare. Downey’s performance as Tony Stark elevated that film above most other comic book films and is probably the biggest reason, in addition to Favreau’s direction, as to why it was such a big hit. With the same creative team returning, there’s no reason to believe they can’t pull it off again.

Inception (Warner Bros.; July 16): If Christopher Nolan (Memento, Batman Begins, The Prestige, The Dark Knight) isn’t one of your favorite filmmakers yet, you’re dangerously close to having your name moved to the top of the list of people who deserve to have hot coffee splashed in their face. There’s no other way to put it other than that Nolan is a true craftsman of film, in the caliber of directors like Stanley Kubrick, Ridley Scott, Francis Ford Coppola and David Fincher. Normally when a filmmaker is at the helm of a big franchise, they go right into another one before the last one has hit DVD, but just like Nolan took a break from Batman between Begins and Knight to make Prestige, he’s taking another “Batman breather” to make Inception. Nowadays, you have to respect those filmmakers that are bold enough to make original films.

The Expendables (Lionsgate; Aug. 20): Sylvester Stallone’s next action adventure directing project is history in the making if only because of its cast. Stallone has put together a cast that almost reads as a “who’s who” of action cinema. The cast includes Stallone, Jason Statham, Jet Li, Dolph Lundgren, Eric Roberts, Mickey Rourke and Danny Trejo, features MMA star Randy Couture and WWF star Steve Austin and has cameos by Bruce Willis and Arnold Schwarzenegger. That is just ridiculous. If you don’t think you’re going to go see this movie, you’re lying to yourself.

The Social Network (Columbia; Oct. 15): You knew David Fincher was going to make my list. What’s surprising and refreshing about this project is how different the subject matter is from Fincher’s usual comfort zone. The film is an adaptation of a book of the same name, which is the autobiography of the guys who created Facebook. I’m a diehard Fincher enthusiast, and the idea of him venturing into new territory and bringing his vision into other genres is exciting.

Tron Legacy (Disney; Dec. 17): The first Tron that came out in 1982 is one of the best and most influential science fiction films of all time. The story followed Flynn (Jeff Bridges) who is sucked into a massive computer and has to fight for his life against the Master Control Program to escape. The film took the idea of cyberspace and computer programs and created a world where programs were represented as people that Flynn could interact with. A sequel had been in various stages of development for years, but now it’s finally happening. Fingers crossed that this lives up to the brilliance of the first one.

The Rum Diary (Warner Independent, 2010): In 1998 Terry Gilliam directed the long-awaited film adaptation of the late great gonzo journalist Hunter S. Thompson’s infamous book Fear and Loathing in Las Vegas, starring Johnny Depp as Thompson’s self-inspired doppelgänger Raoul Duke and Benicio Del Toro as Dr. Gonzo. Aside from being one of my favorite films of all time, it’s one of the best adaptations of a book I’ve ever seen. Depp’s performance is the stuff true acting is all about, and now we’re going to get to see him revisit the character in an adaptation of another one of Thompson’s books. While Gilliam is not directing this one, I’m looking forward to seeing a new take on Thompson’s work by director Bruce Robinson, and a new take on the character by Depp.