A Quack Full of Roses: Oregon Ducks Fly into Pasadena 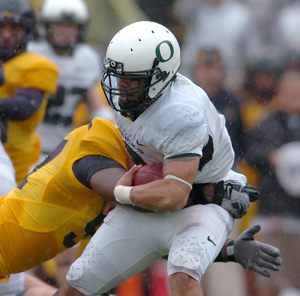 On Sept. 3, the Ducks of Oregon scored just eight points in a losing effort against Boise State in the opening game of the 2009 season.

On Dec. 3, those same collegiate Ducks (10-2, 8-1) narrowly won the Civil War, maintaining an eight-week streak as a nationally ranked team, winning the Pac-10 championship and qualifying for the Rose Bowl in the process.

For the first time since 1995 and the fifth time in the school’s history, Oregon will be playing in the Granddaddy of Them All and will close this 2009 season like they started it – playing against a “State” school on an ESPN-affiliated television station away from the friendly confines of Autzen Stadium.

Of course, Oregon hopes the results are more palatable on Jan. 1 than they were on Sept. 3. While barely favored by 3.5 points in the opening line, according to BetUS.com, it has been an interesting road to the Rose Bowl for Oregon – and it involved a lot of eights. Eight offensive points in a season-opening loss, eight conference wins in 2009, eight straight weeks as a nationally ranked team, eight: the number on the team’s starting quarterback’s jersey, an eighth-ranked opponent in the Rose Bowl – and now, the hope of a pleasant eight-month off-season.

A win in Pasadena on Jan. 1 will make this Pacific Northwest team the talk of the nation, and no doubt, the Ducks are looking to earn some respect. And the school believes it has the explosive offense to get the job done.

It is a high-octane offense that averaged 37.7 points per game and helped the Ducks defeat four of the five nationally ranked teams they faced in 2009. Head coach Chip Kelly, quarterback Jeremiah Masoli and the rest of the Oregon Ducks just hope the opening-night debacle back in September does not come back and haunt them.

In fact, it was a season-opening game Oregon wished they could just forget. That Sept. 3 night was a hard pill to swallow, with Boise State shutting the Ducks down 19-8 at Bronco Stadium in a nationally televised game.

Things became uglier when LeGarrette Blount earned himself an indefinite suspension for punching Bronco defensive end Byron Hout in the noggin. Of course, Blount was allowed to return to the field just before season’s end, but the outlook was bleak for Oregon on opening night.

Oregon would bounce back a week later, defeating Purdue, 38-36, in its home opener, sparking a seven-game winning streak, including victories over No. 18 Utah, No. 6 California and No. 5 USC. It was the Halloween night victory that made the Ducks start to believe they were on to something special, a 47-20 victory that put them on the inside track to win the Pac-10 title and at least earn a Rose Bowl berth.

In control of its destiny, Oregon suddenly found itself in hangover mode the following week, losing to a well-qualified Stanford Cardinal team in a thriller of a game. The 51-42 loss in Palo Alto kept the door open for a few teams to still play for a share of the Rose Bowl title, but Oregon won out its final three games to finish the season 10-2 and in sole possession of first place in the conference.

The rebound started with Oregon’s homecoming game on Nov. 14, with the Ducks easily defeating Arizona State 44-21 before defeating Arizona, 44-41, in a double-overtime thriller in Tucson. Yet, it would take what many considered to be the greatest Civil War game in the rivalry’s history to determine whether Oregon would earn a trip to Pasadena. With No. 13 Oregon State coming to Autzen Stadium, for the first time ever, the Civil War would determine which school would play in the Rose Bowl – and the nationally televised game did not disappoint.

Trailing 30-21, the Ducks scored two rushing touchdowns (by Blount and LaMichael James) and a field goal to earn a come-from-behind victory over the Beavers, defeating Oregon State 37-33 to win the conference title and earn a trip to Pasadena.

Finishing the 2009 regular season ranked seventh in all four major polls, the Ducks now hope to do something they have not done in 93 years – win a Rose Bowl game; Oregon defeated Pennsylvania, 14-0, in the 1917 Rose Bowl.

While Jim Tressel and the Buckeyes have other plans, Oregon hopes to alter them with its blitzing, hurry-up offense. After all, lighting up the scoreboard is the only chance the Ducks have of defeating Ohio State.