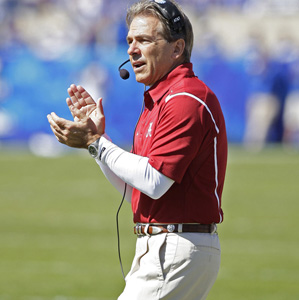 Nick Saban deserves a hand for this season with the Crimson Tide.
(Credit: Mark Cornelison/Lexington Herald-Leader/MCT)

In just three seasons, Nick Saban turned a lackluster Alabama football program into a national championship contender. Saban was so effective in making the Tide relevant, he might as will have turned a pumpkin into a horse-drawn carriage carrying a princess in glass slippers.

Gunning for a 14-0 season, Saban will ride the top-ranked Crimson Tide through the tunnel and onto the Rose Bowl field on Jan. 7 to face off against Mack Brown’s Texas Longhorns in what is considered by many to be a giant of a BCS National Championship Game.

If the slightly favored Tide do hold on to defeat the Longhorns, Alabama not only would have doubled its win total under Saban’s tutelage (from seven in 2007 to 14 in 2009), but the storied, tradition-rich program will claim its 13th national title – and the school’s first since 1992, when a Gene Stallings-coached team defeated the top-ranked Miami Hurricanes in the 1993 Sugar Bowl.

In riding the Tide of an undefeated season, Saban senses he is onto something special in his latest championship conquest, his team giving him real reason to believe that he will indeed hoist his second national championship trophy as a head coach of an SEC program.

With a 32-8 record at Alabama, including 20-4 in conference play, Saban has made quite the name for himself in the SEC. In his five-year stint at LSU, Saban guided the Tigers to a 48-16 overall record (28-12 in the SEC) and three bowl victories – including the 2003 National Championship.

Factoring out a brief two-year stint as an NFL head coach in Miami, Saban has posted an 80-24 collegiate record this decade, including 48 victories in the SEC, considered by many to be the toughest conference in the nation. Many wondered whether Saban would be in this situation to begin with.

After all, it was as recent as 2006 that he was in the ranks of the NFL, disappointedly at the helm of a flailing Miami Dolphins franchise. After posting a dismal 6-10 record, Saban had reportedly told the media (and, allegedly, his employers) that he had no intentions of leaving the NFL and returning to the collegiate ranks.

Yet, leave he did, as Saban accepted the head coaching position at Alabama, much to the dismay of the Dolphins and several football analysts. Of course, no one can argue with success, and, despite a 7-6 record and a “transition” season, the Tide became a bowl team in Saban’s first season as head coach.

Claiming the 2008 Independence Bowl, Saban’s coaching and recruiting efforts paid dividends in the 2008 regular season, with the Tide posting a 12-0 record heading into the SEC Championship Game against Florida. However, Alabama’s season came to a bitter end, losing the SEC title game to fourth-ranked Florida before dropping the Sugar Bowl to seventh-ranked Utah.

The Tide quickly rebounded, though, running the tables in 2009 on the broad shoulders of Heisman Trophy winner Mark Ingram. Alabama finished the season with a 13-0 record, including an SEC championship and a No. 1 ranking under its belt.

It helped that Alabama defeated top-ranked Florida in a rematch of the 2008 SEC Championship Game, opening the door for Saban and the Tide to stamp their ticket to the BCS title game in Pasadena.

“We didn’t come down here looking for a moral victory,” Saban was quoted saying in the Atlanta Journal-Constitution about the contest against Florida. “While I think we were excited about what we accomplished last year, I think we also learned some valuable lessons about resiliency and about the intangibles it takes to not be denied.”

Heading into the BCS Championship Game in Pasadena, Saban is probably telling his boys not to let him down in attempting to deliver him his second national title this decade – a rare feat for any coach to accomplish, but even rarer for a college football coach to do so with two different teams within the same, competitive conference.

Guiding the Tide to its first SEC title in 10 years and, hopefully, ending a 17-year national title drought in the process, Saban is on the verge of silencing all of his critics and proving he definitely belongs on the sidelines of collegiate football. At the very least, by sporting a career 4-6 bowl record, Saban needs to win this game more than any other coach in his position – if anything, to keep critics from saying he is not capable of coaching his team to victory when it matters most.