Youth in Revolt: Michael Cera is so bad … he’s good. 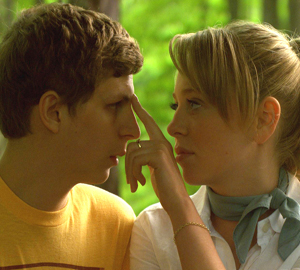 Youth in Revolt, adapted from C.D. Payne’s novels, brings to life the journal entries of a teenager named Nick Twisp (Michael Cera). Nick is a smarter than average teenage virgin who falls desperately in love with Sheeni Saunders (newcomer Portia Doubleday) when they cross paths on the way to their trailer park’s bathroom.

Soon, he’s doing anything he can to be near her, including creating an alter ego named Francois, a cigarette smoking, mustachioed badass who makes him spark a raging inferno that burns down most of Berkeley, Calif. What some guys won’t do to get laid.

The film, Miguel Arteta’s first directorial effort since The Good Girl in 2002, has been gaining buzz and momentum since premiering at the Toronto Film Festival in September 2009. Sitting down with the film’s stars, Cera and Doubleday, in a dimly lit bungalow at the Sunset Marquis Hotel in West Hollywood, they both seem too sweet, self-conscious and eager to have played such sardonic, cynical youths. But the rebellion of adolescence isn’t that far off for either actor.

So how did they act out in their teen years? According to both of them, they didn’t really.

“When I was 16, I was working on ‘Arrested Development,’” Cera offers as an excuse. “[I was] just trying to keep up with school and be around all those people on the show as much as I could. Those were some of the funniest people I’ve ever met, and I was really enamored with them.”

Doubleday seems genuinely stumped by the question before saying with a shrug, “I guess I was a little bit rebellious. I think I was rebelling against being old, not being able to play with Barbies anymore. I still got good grades, so I was like a wannabe rebellious person who wasn’t really rebellious.”

Just as we’re about to change the subject, she gasps as if struck by a sudden realization.

“I had whiskey at 14,” she offers. “That was really intense. I tried to play it off cool, but my eyes were watering so badly they knew it was a horrifying experience for me.”

Perhaps it was his own lack of bad behavior that made Cera so captivated by the material and committed to the project. In fact, he’s been attached and pushing for the film to get made for almost five years.

“I’d read [the book] a couple of times,” Cera says. “It was sent to me with the script when I was 16, and I just really loved it. I was trying to be a part of it for a long time. It was one of those movies that kept getting pushed back, and I was worried that by the time it was being made I wouldn’t be able to play the part.”

Like something out of an old soap opera playbook, Nick Twisp splits into both Nick and Francois Dillinger, a swarthy teen playboy. That element was one of Cera’s favorites to perform.

“It was fun to transform how I look, say really gross things and work with actors I really admire, like Ray Liotta,” he says with an impish grin. “We tried to capture how [Francois] felt in the book as much as we could.”

Meanwhile, Doubleday had the pressure of portraying someone’s dream girl, the ultimate fantasy, a challenge both intimidating and inspiring.

“It can be a bit overwhelming,” Doubleday sighs, “but it’s hard not to fall in love with a girl like [Sheeni]. When I read it, I was just smitten. Who wouldn’t want to play this? Being really confident and have someone chase after you, being a little manipulative and yet remain with the façade of being somewhat sweet. It was fun and amazing when I read it. I had butterflies.”

Youth is Revolt is Doubleday’s first major role and only her third project to date. She says she’s only been at “this whole acting thing” for two years and is astounded by how everything has happened, especially her luck in being cast in the film alongside Cera.

“It just fit,” she smiles when asked about her co-star. “It really felt right. I love Michael’s work so much because it’s so subtle. There isn’t this great transformation. Everything is underplayed.”

Both actors are quick to point to both the script and the source material for the film’s success. Payne’s work was held in the highest regard and, while on many sets improvisation is welcomed, during the filming of Revolt, the cast was devoted to their lines.

“We stuck to the script,” Doubleday says emphatically. “The writing was so special, that was the backbone, the driving force.”

“I loved the writing,” Cera agrees. “The good ones stand out. This was [my pet project] for a really long time.”