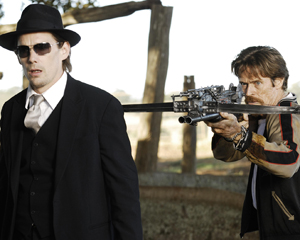 It’s 2019, a time when vampires rule the world but need darkness – and human blood – to survive. It has been a few years since a mysterious plague swept over Earth, infecting human beings and turning most of them into vampires.

The few humans that survived are now first-class targets – and second-class citizens - who are captured and farmed for vampire consumption. As humans slowly become endangered and near extinction, there is one vampire who empathizes with the human plight – a vampire researcher who refuses to drink human blood.

Dr. Edward Dalton (Ethan Hawke) is good at what he does: researching a blood substitute. In the process, Edward hopes he can create a win-win situation: help the vampire race survive while sparing the few remaining humans living on Earth.

Ironically, it is a pair of cautiously trusting humans – Lionel (Willem Dafoe) and Audrey (Claudia Karvan) – who give Edward all the information he needs to make his pipe dreams a reality. With a startling medical breakthrough, Edward is now in a race against time to protect not only his two newfound friends, but also to spread the word that he has the cure to save humanity. Along the way, he must engage in a deadly battle with his own kind, hell-bent on taking both him and his friends down.

Hawke is riveting as Edward, while Dafoe delivers his usual intelligent, quirky humor. Playing the female lead is Karvan, who is pleasant on the eyes and easy to root for. Sam Neill is convincing as a conniving, cold-hearted villain.

Ultimately, while the plot is relatively predictable and there are not too many surprises, Daybreakers is an entertaining flick, perfect for both vampire and sci-fi fans.

Daybreakers releases in theaters Jan. 8.
Article posted on 1/4/2010
This article has been viewed 1632 times.