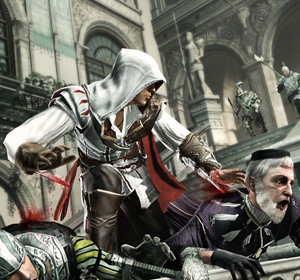 Unlike movies, gaming sequels can actually be better than the original. Here are some honorees that deserve the “Most Improved” title.

The original “Assassin’s Creed” was an intriguing follow-up to the success of the “Prince of Persia” series. By integrating the free-running excitement of “Prince of Persia” into a sandbox environment, the formerly linear gameplay becomes a world where the player can choose how to assassinate his targets. Unfortunately, this also made the game feel fairly aimless with large stretches of roaming between lands without any action.

“Assassin’s Creed 2” picks up where the first game left off, but it fortunately fixed many of the flaws of the first game. By switching into a new genetic memory of the main character’s Assassin heritage, the rather barren world of the Holy Land is replaced by the vibrant, developed landscape of Renaissance Italy. This new Assassin – Ezio Auditore – may not have the skills of his ancestor, but he has a vendetta, new weapons and the assistance of Leonardo da Vinci to help him kill his list of Templar foes.

By adding new challenges, a fast travel system and an engrossing storyline, even the most tedious travel segments become far more interesting than the first title. The new “Grand Theft Auto”-like Notoriety system lets the player choose to rely more on fighting or stealth and the ability to develop a hometown for a salary means that money soon becomes far less of a problem. With the addition of a The Da Vinci Code-style historical mystery woven through the adventure and some truly memorable characters, this title will keep gamers addicted.

If the Italian plumber is the elder statesman of gaming, it is because he doesn’t rest on his toadstool. Mario has been an innovator throughout multiple generations of gaming consoles and handhelds, inspiring the industry to change through reinvention while staying true to his roots. This devotion to reinvention while sticking to the classic style has been most true in the “New Super Mario Bros.” series.

“New Super Mario Bros. Wii” takes the concept of returning to the original games and reworking them to a new level. The game plays like “Super Mario Bros. 3” and “Super Mario World” with callbacks including the Koopa Kids and Yoshi, but the innovations are the real stars. By allowing up to four players to play at once, the simple run-and-jump gameplay can become either a unique cooperative experience where players carry and jump off each other to reach new areas or a competitive struggle where the other players can be as deadly as the piranha plants.

Best of all, the Mario tradition of games that are simple enough for kids yet challenging enough for hardcore gamers is happily intact. The game gradually grows from comfortably easy to extremely challenging, plus there are plenty of well-hidden star coins and alternate paths to keep even the best gamers happily busy.

The “Silent Hill” franchise has been an innovator in horror gaming, with an amazing ability to make even calm moments seem incredibly tense. As the franchise has evolved, it has taken several innovative approaches to scaring the hell out of gamers, but it all comes back to the original title. Remaking that debut title would be a risky move at best.

Fortunately, “Silent Hill: Shattered Memories” does an amazing job of remaking the original game without simply slapping on new controls. This time around, the camera moves directly behind our protagonist as he searches for his missing daughter, giving the player a more immediate sense of fear.

As Harry explores, the supernatural energies surrounding Silent Hill take control of his sense and his cell phone in some truly startling moments that use the Wii remote’s speaker in devious ways. The action is especially ramped up in sequences where the town freezes and Harry must run – often blindly – to reach a checkpoint before being overrun by horrors.

Perhaps the best addition is the psychological element. The game is coached along by a psychiatrist who offers questions and activities to delve into the player’s own psyche.

Just the idea that the game is learning about you and using it against you while you play is actually as freaky as the moments where you are running for your character’s life. It is a very clever move from a series built on getting into the player’s head that pays off well.