The City Barks Back: More Microchips, Less Euthanasia for Cats and Dogs 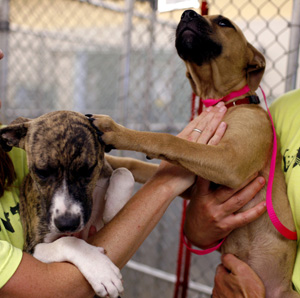 On Dec. 14, the Los Angeles City Council’s Public Safety Committee approved a plan that would require dogs or cats picked up by Los Angeles Animal Services and reclaimed by their owners at city shelters to be fitted with microchips. Microchipping is a form of identification which involves injecting a small chip containing a unique identification number, the pet’s personal information and its owner’s contact information under the skin of a cat or dog via hypodermic needle so that a pet’s owner may be contacted, should the pet be found by or returned to a city shelter.

Presently, all animals admitted to a shelter under the Department of Animal Services are scanned for microchips in an effort to reunite animals with their owners. A requirement such as the one proposed would require pet owners, upon being reunited with their pets, to pay a $15 microchipping fee and would be a significant step in the use of microchipping as standard practice – the greater goal being to cut back on the number of stray cats and dogs that are unclaimed and euthanized.

In a letter to the City Council by former Department of Animal Services General Manager Edward Boks, dated July 23, 2007, it was noted that “Funds generated in excess of purchasing costs [related to mandatory microchip implantation] are transferred annually to the General Fund, offsetting cost of labor to order, track, register, and implant microchips.” Boks had also noted that, were mandatory microchipping implemented in 2006, revenue of $60,450 could have been generated from the microchipping of 4,030 reunited dogs, and $1,445 from the microchipping of 289 reunited cats, at the proposed standard fee of $15 per microchip.

While the microchipping requirement had initially been proposed as an amendment to the Spay and Neuter Ordinance, which was adopted in Feb. 2009, it was, as claimed in a Nov. 10, 2009 letter by Interim General Manager Kathleen Davis to Mayor Villaraigosa, “not acted upon and the [Spay and Neuter Ordinance] file [to be amended] was subsequently closed.” The Nov. 2009 letter arrived more than a year after follow-up correspondence to the Mayor regarding the lost amendment had allegedly been misplaced or misdirected. Only two weeks later did the most recent correspondence get forwarded to the City Council for consideration.

The city’s desire to cut down on the number of unclaimed pets through tighter microchipping standards would also be timely given recent action taken by Los Angeles Superior Court Judge Thomas I. McKnew, who, in December, ordered the city of Los Angeles to discontinue its quiet implementation of a sterilization practice known as the trap-neuter-release (TNR) method. According to the Daily Breeze, McKnew had ordered the city to stop issuing sterilization vouchers for cat traps for feral or stray cats, and stop allowing referrals to private groups that perform the trap-neuter-release method, which is intended to contain the city’s stray cat population.

Just as the lack of microchipping as standard practice would prevent a number of cats and dogs – if lost a second time – from being rescued, instead forcing many to be euthanized due to shelter crowding, discontinuation of trap-neuter-release sterilization would maintain a high volume of feral cats in the city, also increasing the number that are taken into the city’s shelters and, thus, euthanized to make space for new claims. Despite an increase in both adoptions and returns in 2008 from 2007, due to increased shelter space, Los Angeles Animal Services euthanized a combined 19,617 dogs and cats in 2008. Accounting for the increase of animal intake, this is an increase of approximately three percent from 2007; however, in terms of sheer numbers, the euthanasia rate of cats and dogs increased by 30 percent in 2008, from 15,009 the previous year.

In 2008, strays accounted for more than 17,000 cats and 20,000 dogs – respectively three-quarters and two-thirds of those animals impounded. LA Animal Services does directly link the system’s inability to implement a trap-neuter-return system toward feral cats with its rise in euthanasia rate for cats.

Approval of the microchipping proposal and a reversal of McKnew’s ruling could assist LA Animal Services in making good stride toward its eventual goal of being able to implement a no-kill policy.

As with the City Council’s final decision on mandatory microchipping for pets reunited with owners, a final ruling on the issuance of trap vouchers for TNR performance on feral cats has not been determined as of press time but is expected to be made sometime approximately in January.