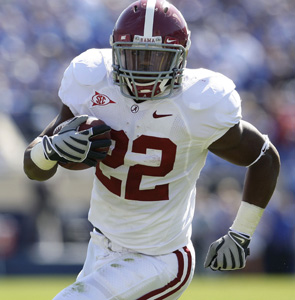 Emotion choked his voice and tears streamed down the face of Alabama sophomore running back Mark Ingram on the night of Dec. 12, when he was named winner of the 75th Heisman Trophy in the closest race ever, edging Stanford running back Toby Gerhart by 28 points.

Ingram was proud to be the first member of the Crimson Tide to win the award, proud to represent the folks of economically depressed Flint, Mich. and especially proud to win it for someone who couldn’t be there with him on the stage of the Nokia Theatre – his dad.

Mark Ingram Sr., the former New York Giants wide receiver who was one of the heroes of their 1991 Super Bowl win over Buffalo, is confined to the Queens Correctional Facility as he awaits sentencing by the U.S. District Court in Central Islip, Long Island, for failing to report to a federal prison last December. Ingram Sr. previously received a sentence of 92 months for money laundering and bank fraud and will receive more time on top of that for his failure to show for three court dates.

Two days before the ceremony, young Ingram had the chance to visit his father in prison.

“He told me to live in the moment, have fun and enjoy myself,” the Heisman winner says. “I’m sure he’s excited and proud of me.”

As the moment approached to reveal the winner, Ingram felt his heart pounding. When his name was called, he was overcome with excitement, and when he locked eyes with his mother, Shonda, and saw her crying, his tears poured out.

Asked what the award might mean to his friends back in Flint, Ingram adds, “Don’t let anybody tell you that you can’t do it if you believe in yourself and have the determination and inner drive to accomplish it.”

Almost certainly, it was Ingram’s performance in Alabama’s 32-13 win over Florida and Tebow in the SEC championship game Dec. 5 that put him over the top. Ingram carried 28 times for 113 yards and three TDs and caught two passes for another 76 yards.

As Tebow says, “That capped it off for a lot of people who were in doubt. [Ingram] had a great game. He gets those slow first downs that keep you off the field for nine minutes at the end and frustrate you.”

McCoy is the winningest quarterback in NCAA history, and although he can’t win the Heisman, he still has a chance to beat Ingram and Alabama in the BCS national championship game Jan. 7 at the Rose Bowl.

“This is not going to disappoint me,” McCoy says. “I’m looking forward to the national championship.”

No doubt, both Ingrams will be, too. His dad recently was quoted as saying his sins should “bring no shame” to his son. Saturday night, the son said his dad made him what he is now.

“Ever since I was a little boy playing basketball, he’d knock me down and block my shot and wouldn’t let me win,” Ingram recalls. “We’d race, and he’d take off.

“He was tough on me as far as my grades go. Everything he’s done to me has helped me develop into the man I am today and the competitor I am on and off the field.”