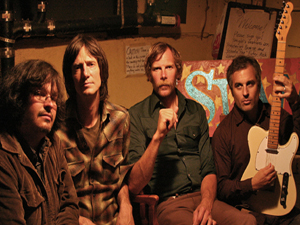 The Mother Hips have been sort of flying under the national radar for a couple of decades now, but the Bay Area psych-poppers nevertheless have a large and loyal fan base who covet the band’s early releases like Green Hills of Earth and Red Tandy while also flocking to the group’s own Hipnic Festival in Big Sur.

The band is extremely well traveled, and their journey inspired the songs on their latest studio album, last October’s Pacific Dust, and band co-founders Tim Bluhm (vocals and guitar) and Greg Loiacono (guitar and vocals) have the Hips on tour once again. The guys will be playing shows up and down the California coast through February, and their L.A. date is Jan. 28 at the Hotel Café.

It is indeed a new year, but the January we’re ushering in here is recording artist January Thompson. Thompson is professionally known simply as January, and she has a new release to help you slide into 2010 effortlessly.

Careful What You Tell the Sky is a sublime set of acoustic music that’s given an electronic makeover by producer RAM (Ramin Sakurai of the Supreme Beings of Leisure) and DJ Bruno Guez, who also helms the Quango label that January records for. January is admittedly a big fan of Kate Bush, and the album gets a little quirky at times via the use of studio techniques like backwards vocal snippets, but the overall sound is, as January puts it, “a pristine wintery soundscape.”

You can sample January’s chilly ambient electronica and a few dance-oriented remixes of the album’s title cut at MySpace.com/januarylt.

Indie world music label Cumbancha has teamed with Tantra World Wide to produce a new television show called “Music Voyager.” The music-and-adventure program will be hosted by Jacob Edgar, the music researcher for the acclaimed Putumayo World Music label. Each 30-minute episode finds Edgar giving the viewer an insider’s look at nightclubs, festivals, recording studios and rehearsal halls as he travels the world.

The first three episodes were filmed in India where Edgar investigated the underground rock, pop and electronica scenes in Delhi and met up with Indian superstar Kailash Kher in Mumbai. The next three segments were shot in Jamaica and feature footage with the likes of Richie Spice, Elephant Man and Marcia Griffiths; those episodes are followed up with a special “The Road to a GRAMMY” series filmed in Los Angeles.

“Music Voyager” will begin airing on PBS in February.

Los Angeles-based label Eenie Meenie has turned 10 years old, and they’ve issued a special T-shirt-and-download combo that fans can pick up for a mere $10. The 10th anniversary shirts are creations of Lunna Menoh, the Japanese designer/artist/musician famed for her “Maid Kissa” maid uniform designs seen at Culver City’s Royal/T café and art space.

Buy the shirt and you get a download code for a 12-song compilation of Eenie Meenie rarities including “Orl” by Great Northern, “With You” by From Bubblegum to Sky, “Je Stim Pack” by DJ Me DJ You and “Brother Brother” by Oranger. Place your order at EenieMeenie.com.

Some bees will sting you, but Jen Murdza’s Good Little Worker Bees will bring you honey! Murdza’s just-released new album is swarming with soulful upbeat pop that her hometown Boston Globe newspaper says recalls a mashup of Diana Krall and Brandi Carlile with a little KT Tunstall thrown in for good measure.

The singer-songwriter now lives in Los Angeles, and if you want to hear what all the buzz is about, bust out of your hive on Jan. 20 to hear Murdza perform songs from Good Little Worker Bees at Café Cordiale in Sherman Oaks.

The dates for this year’s Coachella Festival have been firmed up; the huge blowout at Indio’s Empire Polo Club will take place on April 16, 17 and 18. Festival organizers are promising expanded camping opportunities this year including car, RV and traditional tent camping.

No acts have been announced yet, but early birds can take advantage of a ticket presale and layaway plan now. Find the details at coachella.com.