Emily Maroutian: Gets A Second Opinion 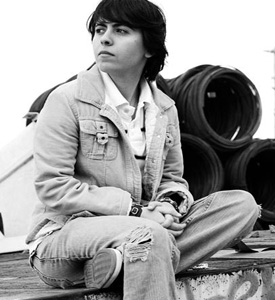 By the age of 23, Emily Maroutian wasn’t your typical 20-something wrapping up college and expecting a career to be handed to her. She had life figured out, for the most part.

She was a published author at 21, played in a punk band with a childhood friend, started and operated her False Idol clothing line, worked at the Van Nuys Juvenile Area Office advising teens and minors and owned a 2006 Mazda Miata that she bought with her own money. Within two years, she owned nothing more than poor health.

“In June 2006, I became sick with vertigo. It was very hard in the beginning because I was confined to a small space and didn’t have many options for activities. Thinking was the only constant,” Maroutian recalls. “Depression, stress and anxiety brought on back pain, blood pressure issues, chronic headaches, chest pains and more.”

Maroutian developed more health complications that included surgery for hemorrhaged ovarian cysts and an anxiety disorder spurred by her depression. For the next two years, she didn’t leave the house for fear of debilitating anxiety attacks.

“By the time I got to a place where I was better physically, I was a complete wreck mentally,” Maroutian explains. “I sunk myself deeper and deeper into a depression without even realizing it.”

Maroutian maintained a journal over her two-year recuperation. It became the foundation for her first non-fiction work, A Second Opinion: Theories and Observations on Life and Human Behavior.

“As soon as I became aware of what I had done to myself through my thoughts and beliefs, I began to ask myself questions,” Maroutian points out. “The questions and answers I discovered eventually inspired the book.”

“I decided to dig deeper into what it means to be a human being,” Maroutian says. “I recalled observations and experiences from my life that helped me unravel the makeup of my breakdown.”

The book examines the human psyche and how outside factors affect our behavior, relationships and overall outlook on life. It doesn’t read like a philosophy textbook. It educates and entertains without intimidating jargon.

The book is comprised of “levels” or chapters that gradually elevate the reader’s understanding of his or herself. A chronological first read is necessary, but repeated reads can be done in any order.

“I wanted to create something that gave people a glimpse into why and how we suffer,” Maroutian says. “I wanted to go deep into the mental design of human beings for signs of preprogrammed behaviors that cause suffering.”

A Second Opinion is influenced by several philosophers and self-help books in the vein of The Secret, but its greatest influence comes from British philosopher, Alan Watts, who popularized Eastern philosophy in the United States early in the 20th century. Although the introduction warns the reader that the book isn’t meant to be an expert observation on life, A Second Opinion still manages to maintain credibility by citing major philosophical studies and relying on adages to prove points.

The information may be nothing new to an advanced philosophy student, but its content is refreshing and ideal for an outsider who is curious about the field.

“[A Second Opinion] can be read as a self-help book, but it can also be read as a philosophy book,” Maroutian explains. “It’s designed to awaken readers to discover insights into their own consciousness and uncover personal truths that lead to their own enlightenment.”

The journey to write and edit it was almost as challenging as its publication. Maroutian took the initiative of self-publishing through CreateSpace, a subsidiary of Amazon.com, Inc. Since its publication earlier this summer, Maroutian has enjoyed a diverse audience of 20-somethings and a mainly older crowd.

“One of my mom’s friends said, ‘Your book made me feel like I could live again,’” Maroutian recalls. “A lot of people keep telling me that they hope that it can be in schools.”

“Polar opposites are still a part of the same pole,” Maroutian explains. “I wanted to take a step back and see the mosaic for the whole and not the individual pieces while at the same time encouraging those pieces to take a look at themselves and where they fit in the big picture.”