Select Quotes From My Favorite Actors 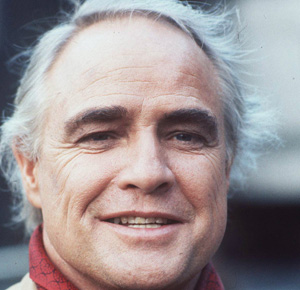 “If you can’t appreciate Brando, I wouldn’t know how to talk to you.” —Jack Nicholson
(Credit: Steve Wood/Express Syndication/MCT)

Instead of rambling on and on about the craft of filmmaking to start off the New Year, I thought I would hit you with another installment of quotes. Last time, I perused the Internet and collected some quotes and pearls of wisdom from six of my favorite film directors. This time I’m switching it up and giving you select quotes from five of my favorite male actors. Enjoy.

“If there’s anything unsettling to the stomach, it’s watching actors on television talk about their personal lives.”

“If we are not our brother’s keeper, at least let us not be his executioner.”

“The only reason I’m in Hollywood is that I don’t have the moral courage to refuse the money.”

“With women, I’ve got a long bamboo pole with a leather loop on the end. I slip the loop around their necks so they can’t get away or come too close. Like catching snakes.”

“I don’t think it’s the nature of any man to be monogamous. Men are propelled by genetically ordained impulses over which they have no control to distribute their seed.”

“If a man can bridge the gap between life and death, if he can live on after he’s dead, then maybe he was a great man.”

“Only the gentle are ever really strong.”

“Gratification comes in the doing, not in the results.”

“When an actor plays a scene exactly the way a director orders, it isn’t acting. It’s following instructions. Anyone with the physical qualifications can do that. So the director’s task is just that – to direct, to point the way. Then the actor takes over. And he must be allowed the space, the freedom to express himself in the role. Without that space, an actor is no more than an unthinking robot with a chest-full of push-buttons.”

“Being a good actor isn’t easy. Being a man is even harder. I want to be both before I’m done.”

“I think Hollywood has a class system. The actors are like the inmates, but the truth is they’re running the asylum.”

“I’ve never been one of those actors who has touted myself as a fascinating human being. I had to decide early on whether I was to be an actor or a personality.”

“One of the things about acting is it allows you to live other people’s lives without having to pay the price.”

“There’s nothing more ironic or contradictory than life itself.”

“The hardest thing about being famous is that people are always nice to you. You’re in a conversation and everybody’s agreeing with what you’re saying – even if you say something totally crazy. You need people who can tell you what you don’t want to hear.”

“If there is a God he has a lot to answer for.”

“I was a square for so long, and it totally amazes me that people think I am cool.”

“Hollywood people tend to think that because one is successful in one aspect of entertainment they can bring them into this particular world and make a success out of them. They ask people like me to be in a film with those people that they are kind of headlining and your name ends up behind them. If you do that, it sanctions the fact that these people come into this world and you think they are worthy of you sharing your time on screen with them. I don’t particularly think that.”

“People mistake me for Laurence Fishburne all the time. And he always gets mistaken for me. (And why not? We’ve both starred in Spike Lee movies, haven’t we?) Even when we’re standing together, people have called him by my name and me by his.”

“I think everyone who says they don’t like watching themselves in movies should stop lying.”

“I’ve grown out of talking like I know something when I don’t.”

“With my sunglasses on, I’m Jack Nicholson. Without them, I’m fat and seventy.”

“A star on a movie set is like a time bomb. That bomb has got to be defused so people can approach it without fear.”

“The thing I like about The Joker is that his sense of humor is completely tasteless.”?

“So I mean it when I say that if you can’t appreciate Brando, I wouldn’t know how to talk to you. If there’s anything obvious in life, this is it. Other actors don’t go around discussing who is the best actor in the world, because it’s obvious – Marlon Brando is.”

“You only lie to two people in your life: your girlfriend and the police.”