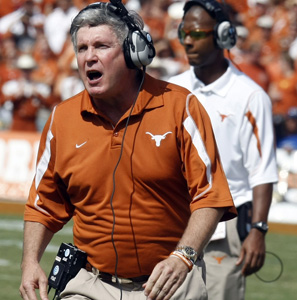 No one wants to go to battle with a Mack truck. Almost always, it will be a losing battle, mostly because it is the largest road-based vehicle.

College football has its own version of the Mack truck, a man who opposing teams are almost certain to find themselves losing to in an impending match. And, just like the Mack truck, this man is in a class of his own, high and above everyone else who dares consider himself a worthy adversary.

That man is, of course, Mack Brown, the head football coach of the Texas Longhorns. This year, Brown has guided his team to a perfect 13-0 record and a berth in the BCS National Championship Game at the Rose Bowl on Jan. 7.

As the nation’s highest-paid coach (His $5,000,000 per year tops among all college generals.) of college football’s No. 2 team (per the BCS final standings), Brown is definitely a force to be reckoned with. After all, it is no accident that he is coaching for his second BCS National Championship in four years – the 58-year-old coach has re-defined football programs at Texas and North Carolina, all by establishing a tradition of consistently winning at the highest level possible.

The results are irrefutable. Brown sports an overall record of 214-100-1, including a 128-26 record as Texas head coach. In early December, the Longhorns wrapped up their second Big 12 championship under Brown’s tutelage, coincidentally earning the team its second trip to Pasadena as the No. 2 team playing for the national title against Nick Saban’s Alabama.

“It’s a dream for me to be able to coach a team at Texas against Alabama,” Brown told the Mobile Press-Register shortly after the match-up at the Rose Bowl was decided. “It’s two of the great teams that helped mold and change college football.”

Of course, Brown’s own molding and changing of college football has resulted in him going to the bank with the largest paycheck in collegiate athletics – and the question he must now face is whether he will earn that large chunk of change on Jan. 7.

Such a question is probably more preferable to the ones Brown received early in his career. After turning the North Carolina Tar Heels around from a 1-10 program in 1988 to a 10-1 Gator Bowl title-defending team in 1997, Brown arrived in Austin and was almost immediately dubbed “Coach February” – an indication that he was unable to produce results on the field despite recruiting so well in the off-season.

Indeed, in five of his first eight seasons at the helm of Texas football, Brown was far from qualifying himself as a “Mack” truck, losing to chief rival Oklahoma three times during the regular season and keeping the Longhorns out of the running of both the Big 12 and National championships. Through 2004, Brown did a respectable job in leading his team to the postseason, as Texas became a regular in either the Holiday Bowl or the Cotton Bowl. Yet, his teams consistently fell short of claiming conference or national titles.

All that changed in 2005, when a Vince Young-quarterbacked team started the season as the No. 2 team – trailing just USC in preseason polls. Both teams managed to maintain their respective rankings through most of the 2005 season, setting up what would be a classic Rose Bowl game against top-ranked USC at the Rose Bowl in January 2006.

Entering the game as underdogs, the Longhorns prevailed on a memorable Vince Young touchdown run on a fourth down in the final minute of the game, allowing Texas to defeat USC, 41-38, to claim its first national championship in 35 years. The victory vaulted Brown into elite status, allowing him to finally be the “Mack” truck of college football coaches.

Since 2004, Brown has posted a 69-8 record, which includes two 13-win seasons, five bowl game victories, two Big 12 titles, two Rose Bowl victories and a national championship. In all, the Longhorns have won at least nine games in each of the 12 seasons Brown has been at the helm, with the last nine campaigns ending with at least a 10-3 record.

Now, it is up to Brown to add one more cap to his feather – a 14-win season. If his underdog Longhorns can defeat the Crimson Tide of Alabama on Jan. 7, then all the detractors – including the recent critics who questioned whether he was worth a $5 million salary – will have little leverage against college football’s Mack truck of a coach.

After all, no one can argue with success. With back-to-back victories over chief rival Oklahoma, the prospects of the school’s first-ever 14-0 finish and a second national title in four years – all on Brown’s clock, no less – it would be hard to argue anyone is more deserving of the title of the highest paid shot-caller in college sports.