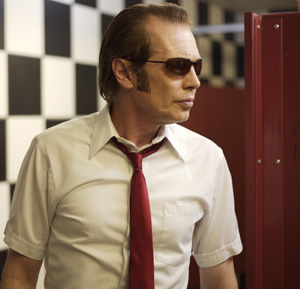 Steve Buscemi is the kind of actor who, unless you’re a film junkie, you remember not by his name but because of the parts he plays. Or possibly as “that funny looking guy from Fargo. Didn’t see that one? How about Big Fish? No, not that one, the other funny looking one … OK, fine, Mr. Pink from Reservoir Dogs.”

Really, it just devolves into roles in the end. It always does. And in Buscemi’s case, this can usually be chalked up to the actor’s talent for picking complex characters.

Buscemi’s latest venture is a starring role in writer/director Hue Rhodes’ debut film, Saint John of Las Vegas. Here, Buscemi plays John, a man who runs away from a life as a (fairly unsuccessful) gambler in Vegas and winds up with a more normal-looking life working for an auto insurance company in New Mexico.

After some urging from his smiley-face-obsessed office crush, Jill (Sarah Silverman), John asks his boss, Mr. Townsend (Peter Dinklage), for a raise. Mr. Townsend immediately sets John to train as a fraud detective under Virgil (Romany Malco), who takes John on a journey that may just point him towards the salvation he’s been looking for.

For a first time director, getting a cast like this together for an independently produced film can be hard. Even getting the script into any actor’s hands can be a challenge. Luckily for Rhodes, Buscemi’s agent – who passed the script on to the actor – knows his client. “I always look for scripts that are character driven,” says Buscemi of the film. “I mean, there’s certainly plot, but it seemed like the characters were driving the story rather than the other way around.”

Of course, Buscemi also makes no secret of his preference in working conditions; he doesn’t hesitate to work with new directors.

“It’s exciting to work with somebody who’s sort of discovering things and the enthusiasm and excitement that they have in making their first film,” Buscemi explains. “It’s really nice to be a part of that and to contribute. I like working with writer/directors, because then you have everybody right there. Hue is the best person to ask any questions that I had. We would have rehearsals – me and Hue and Romany – and we would try out different things. Hue would give me one direction and Romany another, and we’d just see what happened.” But it does take a special sort of director to get Buscemi, because he’s not only an actor but, in Saint John of Las Vegas, Buscemi is also a producer.

“I liked the fact that he was a first time filmmaker,” says Buscemi of Rhodes. “I mean, he had made a couple of shorts, but he was someone who went to film school later in life and I just really liked his personal story and who he was. It seemed like a worthwhile project to get involved in. At around the same time, I was starting a production company with Stanley Tucci and Wren Arthur, and we ended up being co-producers on the film, as well.”

And unlike some first time directors, Rhodes “seemed to have a clear vision of what he wanted to do stylistically and who these characters were,” says Buscemi thoughtfully, “and yet he was also very collaborative. He was really interested in what the actors had to say and was willing to try things.”

Of course, it was also John the character that drew the lead actor to his role.

“He seemed like someone I would know,” says Buscemi. “I liked that he was somebody who was trying to reinvent himself and start over, but those old addictions kept creeping up on him. Even though he had these weaknesses, I still liked the fact that he really tried to get things done. He’s always trying to make the best of things.”

In a lot of ways, Buscemi does seem to likes these types of roles.

He adds, “[John]’s a funny character, and he’s got problems. I like to play characters of people who are struggling with something. And John certainly seems to have those struggles.”

Saint John of Las Vegas releases in select theaters Jan. 29.
Article posted on 1/5/2010
This article has been viewed 4554 times.

Interviews
Lily James and Sebastian Stan find a real relationship at the heart of 'Pam & Tommy'
223 views
Interviews
Ricky Gervais knew people would be mad about his new Netflix special. He did it anyway
832 views

Interviews
The star of Oscar-nominated 'Flee' gives his first interview: 'I wanted my story to be seen'
1,196 views

Interviews
'Crazy Rich Asians' made Henry Golding a star. Now he's showing Hollywood everything he can do
886 views
bid=||