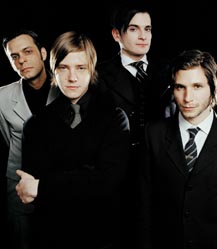 Daniel Kessler has been listening to John Coltrane recently. Not because he is “jazz crazy,” as he puts it, or because he wants to channel Coltrane’s sax techniques and impulses through the lead guitar Kessler plays for the band Interpol.

It’s because he likes the mood Coltrane puts him in.

Kessler brings up the jazz legend in response to a question: What guitar players have influenced him? Like some rock musicians, Kessler (a) doesn’t mind letting people know that he listens to something more sophisticated than rock music and (b) doesn’t really want to be compared to other rock guitarists.

“The process of writing songs is very separate from the experience of listening to music,” he says during a recent phone interview. “So guitar players don’t influence me per se. Songs influence me.

“I’m listening to ‘Ole’ by John Coltrane. It’s not like Coltrane’s going to influence my songwriting or guitar playing. But I like to connect with the mood of a song, and I really appreciate its mood, its chord changes and, I don’t know, its emotional level.

“If I were a learned musician, I might appreciate things like, ‘Oh, that’s in D minor.’ But I’m a bastard guitar player; I write by feel only.”

So Kessler doesn’t think his appealing guitar work on Antics, the latest Interpol album, sounds overtly like the work of any other guitar players. And maybe it doesn’t.

But he also doesn’t think Interpol sounds much like any other band. That’s contrary to what a lot of people have thought since Interpol’s first album, Turn on the Bright Lights, was released in 2003. That record prompted lots of acclaim-with-a-hitch when it was released, as in: “Good stuff, but they sound a lot like ...”

Even in the town that bred and cultivated them, New York, a writer at The Village Voice wrote of Lights: “If they remind people of a band like Joy Division, a group that combined the spirit and energy of U.K. punk with the art-rock futurism of Bowie/Eno/Stooges, well, there’s a reason for that. They’re trying to.”

Not so, says the guy who builds and designs most of the band’s songs. “I don’t identify with those terms,” Kessler said. “I’ve never thought much about what or who we sound like. If you said we sounded like a jazz-pop band, I might be like, ‘Whatever,’ too.

“We don’t try to sound like anyone. We don’t want to be labeled. What’s important to us is that we really believe in what we’re doing.”

That seems to be another way of saying, “Any resemblance to characters living or dead is coincidental.” And speaking of living or dead, there are some distinctions between Interpol and all the bands it gets compared to, especially the late, great Joy Division.

For starters, none of the music on Lights or Antics suggests that the lead singer is one grand mal seizure or an ex-girlfriend away from hanging himself. Nor does it suggest that, if he did kill himself, the survivors would go on and start a band that sounds like New Order.

Still it was hard to listen to Lights and not drift back to the early ’80s, when a certain flavor of gloomy British post-punk bands (like Joy Division) were born. The vocal similarities between Ian Curtis and Interpol’s Paul Banks didn’t discourage comparisons, either. On top of the musical kinships, the bands shared another, more esoteric connection: The name Joy Division comes from concentration camps in Nazi Germany; Interpol is also the name of the international police bureau, which was relocated to Berlin when it was overtaken by the Nazis in 1942.

So the contrasts and comparisons between bands were drawn and inferred repeatedly. Then Antics was released in September, and reviews were all over the critical spectrum. The haters found it monochromatic or pretentious or (again) too derivative. The supporters (and there were many), however, looked past the band’s obvious roots and appreciated some of the music’s finer points and its other influences. “There are places where the swooning self-absorption and headily bittersweet pronouncements suggest the Smiths as much as Joy Division,” a critic wrote at UK/Launch, a Yahoo! music Web site.

In The Kansas City Star, I wrote: “There’s more craft in their songwriting, and time on the road seems to have made Interpol a real band, not just an act exploiting a fad. They’re at their best when the going gets manic and stormy (‘Evil,’ ‘Slow Hands’). And though their balladry needs work, there’s evidence here (‘Take You on a Cruise’) they’re starting to figure out how to dim the lights without being just gothic and dreary.”

Some critics even noticed a few of the tricks Kessler was doing on guitar in the marginalia of his songs.

“Kessler might be Antics secret star,” wrote Mikael Wood in The Village Voice. “None of the other (musicians) in Interpol’s cohort have figured out how to play warm and cool at the same time like he does … Just try listening to the way the guitars in ‘Narc’ swarm around Banks’ vocal, buffeting it while simultaneously buffering it from its own force. Or listen to how the dilapidated sock-hop doo-wop line Kessler unreels in ‘Public Pervert’ enacts Banks’ desire to `resuscitate the fading sounds of your life.’”

Reactions like that suggest that the time Kessler has spent cuddling with jazz legends is paying off. At least it is giving Interpol the beginnings of a signature and distracting some listeners from the band’s core sound, which still sounds like a small host of ’80s bands and the era they lived in: Joy Division, the Smiths, the Chameleons, Close Lobsters, Gang of Four.

As maddening as it is to bands and songwriters, such comparisons have become sport among fans and critics. Several magazines use comparative techniques to give readers an immediate idea of what a band or album sounds like. Alternative Press magazine runs a “rocks like” list with its CD reviews, like: Mates of State’s “All Day” EP rocks like the Postal Service’s “Give Up.”

Kessler, though, wants no part of that game: “That’s for fans and critics to say, ‘They’re not like that, they’re like this.’ And it’s not for me to say, ‘No, we sound like this.’”

But there’s so much recycling and revivalism going on in music these days, comparisons are inevitable, even among obscure bands and performers. That includes another guy Kessler has been listening to lately: Arthur Russell, a cellist/composer/disco-auteur and underground music savant who died of AIDS in 1992.

“It’s just Russell and his cello,” Kessler said of the music, “and he’s singing in this beautiful voice. It’s way out there, but it’s very melodic, too.”

Not so “out there,” however, that someone couldn’t find a few reference points. Here’s what Rolling Stone writer David Fricke said about Russell: “If Nick Drake had lived long enough to make records with New Order, they might have sounded something like this.”

Three dead guys are mentioned or implied in that equation (Russell, Drake and Ian Curtis). No doubt none would like the company he was put in, and each would insist that what he did was unlike anything else.