Lackthereof: A Retrospective 1998-2008 or I was a Christian Emo Twentysomething 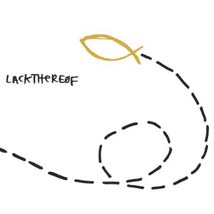 If you’ve heard the Portland trio Menomena, you’re aware of what can happen when phenomenal creative forces are pooled into a collective whirlwind. Recent solo releases such as this Lackthereof retrospective demonstrate that the parts are equal to the whole in this case. On this release, Menomena drummer-singer-composer Danny Seim chronicles 10 years of sonic experiments that he originally gave out only in CDR format to friends and those in the know.

Indeed Seim’s vocals range from eclectic chipmunk on acid to scratchy folk to sarcastic rap. His quirky sense of humor shines through on tracks like “Tongues O’ Fire” and “Safely In Jail.” “Modern Christianity” is distorted minimalist dream pop and for contrast, “Half Off Drugs” is reminiscent of early industrial rock before metal guitars became standard.

Seim’s lyrics touch on themes of Christianity with a critical sense of irony that will appeal to believers and atheists alike. Tackling secular topics, his prose flows much like a train of thought derailed. But it’s an interesting journey!