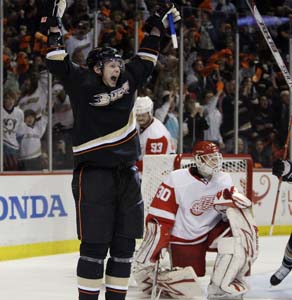 And all the King’s men fell, only to find themselves in the company of Ducks.

It was not too long ago that Southern California professional hockey virtually bracketed the Western Conference standings, what with the Los Angeles Kings in first place and the Anaheim Ducks staking residence in the cellar. Now, the overachieving Kings have come crashing back to reality while the Ducks are picking up the pace.

Barely holding on to the eighth and final Western Conference playoff spot with 53 points – a position many NHL pundits reasonably expected them to be in at season’s end – the Kings have struggled mightily since Dec. 12, when they posted a 21-10-3 record (45 points), at that time the best record in the west.

In the 30 days since, the Kings have lost seven of 11 games, including six of them by one goal. Now sporting a 25-17-3 record (53 points), the Kings are third in division and eighth in conference.

With no significant injuries, the Kings are just suffering a case of cooling off after a torrid start, with Anze Kopitar a case-in-point. Once the league’s leading scorer in November, Kopitar has only scored two goals and assisted on four others in 11 games since Dec. 12 – after scoring 16 goals and posting 21 assists in the first 34 games of the season. The Kings better hope Kopitar’s power outage is not a habit, as he is vital to the team’s playoff hopes.

Meanwhile, the Ducks are getting healthy and finding their groove again at last. Finally sporting a winning record (20-19-7, 47 points), Anaheim has won its last four games to be above .500 for the first time since Oct. 14.

While the Ducks are still at the bottom of the Pacific Division, they trail fourth-place Dallas by just two points and are just six points out of a playoff spot.