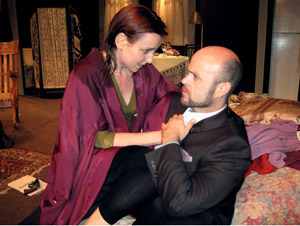 Writer-actor Paul Kampf stars opposite Liz Rebert in this drama that wrestles with love, coincidence, denial and the secrets we keep. Director Gita Donovan comments, “So often the ‘truths’ in our lives are based on defensive lies, leading us to destroy ourselves and those close to us.”

The play itself is the story of a spur-of-the-moment relationship between Martin Healy, a mathematician speaking in New York about 9/11 eight years after the tragedy, and Angela Madison, a waitress he goes home with. The story fattens when Martin reveals his ulterior motive for coming to New York: to search for a woman who he had a weeklong affair with decades ago. Guess whose mother it was?

Through incredible circumstances, these two are brought together in a meeting that alters their lives forever.

The themes of the play initially remind me of Virginia Woolf’s “moments of being” (i.e. flashes of awareness which reveal a pattern hidden behind the wool of daily life). Writer Paul Kampf notes, “We as Americans seem to have a collective need to bury unpleasant truths, to live a sort of ‘life-lie.’ When reality becomes too complicated or painful, like the events of September 11, it’s easier to look away than to examine it too closely.”

The play’s power rests on incredible coincidence. Its unfurling, however, is tedious and remains opaque. The heightened sense of reality Kampf portrays makes Martin and Angela entertaining, but also extremely frustrating; they are self-centered rather than tortured souls with a need to know.

Martin’s search for his “one true love” is tiring. Instead, the bumps of wisdom stumbled upon by each character carries the play. Namely, that events such as 9/11 shut people off from the world, so much so that they want to hide from the world.