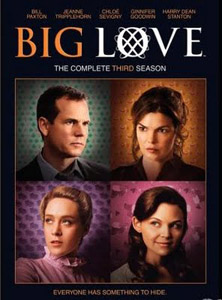 The Idiotbox: Bill Paxton stars as a polygamous patriarch in Big Love: The Complete Third Season. The HBO drama follows Paxton as he juggles an expanding business, three competing wives and the federal government’s crackdown on polygamy. All while battling “The Prophet” (Harry Dean Stanton), a kind of Mormon mob boss. Chloë Sevigny and Jeanne Tripplehorn co-star.

Everyone’s favorite nerd/spy returns in Chuck: The Complete Second Season. The hour-long comedy follows a computer geek who inadvertently downloads government secrets into his brain. Now he finds himself in over his head as the nerdiest member of the CIA.

All eight episodes of the unfortunately short-lived series “The Philanthropist” arrive in The Complete Series. James Purefoy (“Rome”) stars as a billionaire playboy who turns his life around to become a globetrotting do-gooder. Emmy award-winning producers Tom Fontana and Peter Horton (“Homicide,” “Grey’s Anatomy”) co-created the series.

Emmy winner Toni Collette stars as a woman suffering from multiple personalities in United States of Tara: The First Season. Co-created by Steven Spielberg and Juno screenwriter Diablo Cody, the show follows a wife and mother who at times believes herself to be a hard-drinking Vietnam vet, a crass teenager and a perfect ’50s housewife.

Stranger Than Fiction: Like The War Room, By The People: The Election of Barack Obama gives amazing access into the heart of a presidential campaign and the election of America’s first African-American president. Get behind the scenes footage of family, senior campaign staff and opponents.

Under the Radar: Armando Iannucci (“I’m Alan Partridge”) co-wrote and directed In The Loop, one of the sharpest political satires in some time. Set in the whirlwind land of high-stakes spin and wartime backroom dealings, the film belongs alongside Wag the Dog and Dr. Strangelove. James Gandolfini gives another engaging performance.

The King of B Movies, Roger Corman, was a one-man movie studio, giving many Hollywood legends their starts, from Jack Nicholson to Francis Ford Coppola and Martin Scorsese. Best of the B*s Collection 1: Hot Bikes, Cool Cars & Bad Babes includes seven of Corman’s digitally remastered films: Naked Angels, Bury Me an Angel, The Fast and the Furious, T-Bird Gang, The Wild Ride, The Winner, and Angels Hard as They Come.

Spike Lee brings the Tony Award-nominated musical to the big screen in Passing Strange: The Movie. The semiautobiographical rock opera is based on singer-songwriter Stew’s experiences leaving 1970’s Los Angeles to travel Europe in search of himself.

Rising festival circuit favorites the Zellner Brothers make their feature debut with Goliath, a quirky deadpan comedy about a divorcée at the end of his rope looking for his lost cat.