Blood Heart Gang: Educating People One Shirt at a Time 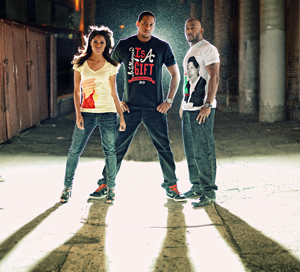 “I got stopped 60 times in one hour while at the Getty wearing that shirt,” says Gomez, who was sporting the Oscar Schindler shirt from his latest collection. “They read the name and the back and are surprised, and want to know how to get it.”

By taking historic figures and placing them on T-shirts, Gomez has attracted attention from all over the map. The image brings in the unsuspecting bystander, but then they see writing on the back. Before they know it, they are learning something, or in most cases, are reminded of the history of the world.

“People love the fact that we use Schindler for one of the shirts. Everyone knows the story, but not everyone knows him,” says Gomez. “Not everyone has a real concept of what he looks like.”

Putting a face to a story we know from history and adding some style changes the game. Suddenly, the history of our species is appearing on the streets again and becoming very relevant.

“I had a Marie Curie shirt, but it sold out. The girls really gravitated to her story, and the shirts went fast.”

Gomez goes on to explain why he decided to make apparel with someone other than Obama on it: “The goal for me is to teach about people that you don’t know about on a daily basis. I picked these people because they made a sacrifice for the greater good.”

Blood Heart Gang has come up with a concept that is not only cool to wear but is relevant. In addition to spreading the stories of historic figures, Gomez is also giving back.

“For every shirt I sell, I give one away. I went on a tour in September of 2009 to 10 cities in the U.S. and several abroad to talk with kids and let them know there’s more to life. A lot of kids don’t know about all the paths they can take in life. Let’s go educate some kids!”

Look for more styles and accessories coming in the spring, and in the meantime, pick up a shirt. Some are only $5, and all are made from high-quality materials.