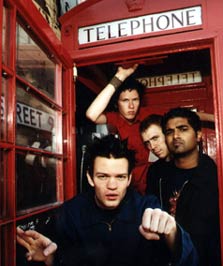 After what seems like endless touring, the boys of Sum 41 (their name comes from the fact that they came together as a band 41 days into the summer of ’96) are taking a day off. Kicking back at home in native Canada, lead singer and guitarist Deryck "Bizzy D" Whibly and bass guitarist Jay "Cone" McCaslin talked openly stars at the relatively tender age of 21.

"Being on the road is fun," says Whibly. "We take advantage of a lot of free stuff; a lot of people buy us drinks [and] take us out to parties and bars. Everything’s there if you want it——all the clichés are there."

And why not? After the explosive success of their double platinum full-length debut, All Killer, No Filler, Sum 41 (which is rounded out by Dave "Brown Sound" Baksh on guitar and Stev "Stev-o" Jocz on drums) deserves to enjoy the fruits of their labor. In a recent Rolling Stone reader’s poll, Sum 41’s mega-hit "Fat Lip" was voted Best Single and their song "In Too Deep" was voted Best Video. Sum 41 was also named Artist of the Year, and All Killer ran second only to rock icons U2 in the Best Album category. With their sophomore effort, Does This Look Infected? dropping on November 26, Whibly doesn’t seem worried in the least about the so-called "sophomore jinx."

"We just try to write the best songs we can write and do the best live show we can do. I think we’re a much better band now. We can actually play our instruments (laughs)! That’s definitely an improvement. The whole record is better all around."

The first single from Infected, "Still Waiting," is another perfect example of the band’s high-energy party rock. The guys admit that the new songs are more in line with their influences, which include metal bands like Iron Maiden, Metallica and Slayer. Yet the song that is closest to Whibly’s heart is a more melancholy and personal track, "Hell Song."

"It’s about one of our best friends we grew up with–we just found out she’s HIV-positive," he observes. "The whole song’s about how life can change so quickly and how you can’t take it for granted. It’s all opened our eyes a little bit——a lot, really. It’s the biggest thing that’s happened to our group of friends yet."

This serious note is a rare one for a band that’s earned a reputation as good-natured pranksters. And in part, it’s that tendency that helped launch their careers. The band members joined forces while still in their early teens in their home town of Ajax, and were discovered after submitting what they called a "shitty recording" of their songs as demo to a few record company. The demo was accompanied with a home video of the band goofing around and playing practical jokes. Their raw energy appealed to Island Records, which signed them to a contract and released their debut disc, Half Hour of Power.

Some of those home videos that helped launch their music careers can be seen on their recently released DVD, Introduction to Destruction. Along with music videos and live show footage, you’ll also see early footage of the baby-faced boys using mega-sized water guns to spray innocent passers-by in their cars, and snippets of amateur films put together by the guys.

In regard to the home movies, Whibly admits, "we never wrote anything out. Everything was ad-libbed and each scene went from one to the other. It was mostly me and our drummer Steve. We had so much time back then." The home movies are full of campy, off-the-wall humor, but also offer rock-solid proof of the band’s strong off-stage relationships.

After their sobering story, Whibly and McCaslin are back to telling stories about adventures on the road, the fans and the girls, and address some of the secrets that swirl around the Sum 41 camp. For instance, Whibly confesses that the Olsen Twins are on his celebrity "hottie list," while the latest rumors are that that he’s dating Avril Lavigne (he’s not), he wears teddy bear pajamas to bed, and "that we’re [bigger] dicks than we are. We’re nice guys!" He adds, "lots of people try to start shit with us at bars. A dude will scream something like, "Sum 41 suuuucccks!"

"The other night on this last tour," says McCaslin, "Deryck was at a bar and a guy said that, and [Deryck] shook a beer and sprayed it in his face. The guy was three times the size of Deryck and the guy jumped on him." Whibly triumphantly adds with a smile, "Then the guy got kicked out."

But is the rock star life really as crazy as the fans believe it to be? "We get drunk and we get stupid," admits Whibly. "One time when I was in New York, I got so wasted that I was making out with all these girls at a bar——girls that I didn’t even know. I had to be carried out of the bar and then I crawled under the [tour] bus to try and sleep. Our tour manager had to drag me from under the bus and put me in my bunk." The audibly embarrassed Whibly quickly adds, "I’m rock star to the bone, baby!"