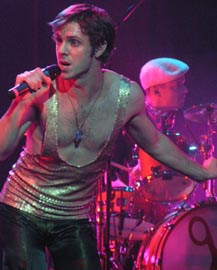 The night the Scissor Sisters headlined at the Wiltern required a double-take. Was I at a concert venue or a aboard a gay cruise line? Either way, the excited energy and flamboyant enthusiasm was palpable. The eccentrically dressed, mostly male crowd donned Pam Anderson-style, brightly-dyed, faux fur hats and boas. Comparatively, the bands performing that night looked ordinary. The music, on the other hand, was anything but.

The Scissor Sisters' music - a combination of '80s pop, glam, classic rock and disco - is a refreshing departure from the mainstream music norm. Having been compared to such greats as Elton John, David Bowie, and the Bee Gees, the buzz around this New York band just keeps growing.

Their techno cover of Pink Floyd's "Comfortably Numb" first got them attention a few months ago in dance clubs. Now, their single "Take Your Mama Out" is getting airplay internationally, with the band performing on world renowned TV shows such as "Saturday Night Live" and "Late Night with Conan O'Brien."

One would think that the band's campy sense of humor and kitschy live show would be a detriment to mainstream success, but instead, it has made them stand out from the crowd and develop a strong following.

The dynamic and flamboyant singer Jake Shears is the perfect ringleader for the band. His energetic and dramatic style of performing is reminiscent of Madonna's "Vogue," with hints of something you would see in a Richard Simmons' exercise video. The colorful flashing lights of the stage represented the music impeccably, being a kaleidoscope of sights and sounds.

Female vocalist Ana Matronic describes Shears as looking like "a Cossack aerobics instructor." (Yeah, maybe if that Russian was wearing rhinestone accented cowboy boots and a sparkly gold tank top.) Whether it be a slower ballad or an arena rock anthem like "Return to Oz," Scissor Sisters perform their songs with heart and serious musical talent.

The Scissor Sisters' live show was never boring and always full of surprises. A slender man in a barely there hula skirt and silver hula hoop performed alongside the band for two songs. Spinning the hoop, bending, contorting and doing some suggestive pelvic thrusts, the dancer achieved all this, sometimes while sitting over the horizontal Shears.

After a few costume changes, two disco balls and a tambourine, the Scissor Sisters built up to their encore. This included quite a few highlights: the hit single "Take Your Mama Out," a slowed down cover of Franz Ferdinand's "Take Me Out," the hula hoop guy (in a new outfit) and a very tall transvestite wearing an enormous wig and high heels. Talk about a grand finale.

With a headliner like Scissor Sisters, what band could possibly have the nerve to open the show? The spot was filled by the equally charming hey willpower, the side project of Will Schwartz from the popular indie band Imperial Teen.

Throughout hey willpower's entire set, there were no musical instruments onstage aside from a DJ's keyboard off to one side. Meanwhile, four dancers dressed in matching , all-white uniforms accompanied Schwartz. The thumpa-thumpa techno-pop music required moves that were just as exciting and lighthearted as the music. Part interpretive dance, part "the robot" and part seizured skanking, the synchronized dancing was quite a spectacle. A highlight included the song "Everybody Get on the Floor," where Schwartz taught the eager audience dance moves and was met with a great response and much participation.

Both Scissor Sisters and hey willpower brought their music to life with an extravagant and gaudy live show, which was really more a burlesque dance party disguised as a concert.