Dahmer Vs. Gacy: Actor-director Ford Austin opens up about his film. 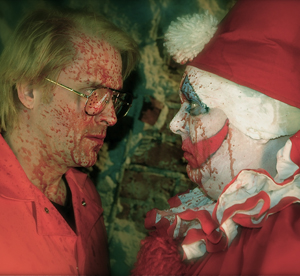 What attracted you to direct this film?

Two things. Firstly, I was originally cast in Dahmer Vs. Gacy about six years ago and we went through a series of test shoots that looked really great, but the money fell through and the movie died before it was able to go into production. Time went on and I did a few other films like The Wright Stuff, Evil Ever After and Carnies before getting brought in to found WonderHowTo.com and serve as its Vice President of Original Content. I was one of five founding partners and got a good enough salary that I started planning the movies I would make after I sold out my gigantic amount of shares in the company. I had stars in my eyes made of Internet funny money on the level of a Yahoo or Google executive. When I came down to earth, I realized after I left the company to start my own production company that I had enough money to actually do it. About that time, I was approached by Chris Watson, the writer of Dahmer Vs. Gacy, to star in and direct the movie. I bought the script and started putting it together.

Second, Dahmer Vs. Gacy was a perfect fit for me as a script because it was something too crazy and wild for any studio or production company to attempt because of its outrageousness. There was no way anyone would ever come up with the same idea and actually do it.

You star in and direct the film – how is it juggling those two duties?

I watch the movie and feel the pain I was in during the shoot because of all the work I had to do as both the director and star. When you do both these things, you really have to spend a huge amount of time in pre-production making sure you have all your acting choices down so you can focus on the directing of the movie when you get into production and vice versa. On the other side of the coin, being so busy really forces you to prepare. We were shooting the scene where I am directing the legendary actor Jerry Maren, who appeared in The Wizard of Oz in 1939 as the head of the Lollipop Guild, and I had no time to be nervous or concerned about anything other than getting my shots. That is probably the best thing about having to prepare so much is that you don’t have time to lose your steam. You just have to suck it up and make your shoot days according to the schedule and the shot list.

Talk about the best parts of this production.

The most amazing parts of this production were definitely the shoot days we had at a location I rented in Toluca Lake, which was the real Beverly Hillbillies’ mansion that the creator of “The Beverly Hillbillies” based his TV series on. I approached the owner and by the first day of production I had locked it in to be the main location for the climax of the movie. We had the entire empty house that the windows had been removed from to create the showdown of Dahmer and Gacy where they go head to head and take on five ninjas and a super serial killer at the same time. I also had a creepy back room I filled with 200 ears of corn and 20 bales of hay to create a holding chamber for our super serial killer, played artfully by Ethan Phillips (Neelix on “Star Trek: Voyager”). Here we are in this historic mansion with a sick, twisted clone, surrounded by bales of hay, power eating raw corn in one room while a mad scientist is tied up and tortured by Jeffrey Dahmer in another room, and then in walks John Wayne Gacy in a full clown suit and makeup to fight a ton of ninjas in the living room. All in a day’s work, right?

In your own words, what is the movie about?

This movie is about the creative spirit of the individual filmmaker who is told all along the way he should try and deliver what Hollywood is making. Instead he decides that his best bet is to go the completely opposite direction and adhere to the original bizarre, creative lunacy he originally intended.

This movie seems to be a horror film. Is it humorous or truly scary?

In grad school I wrote a History of Theatre thesis on an absurdist theater and playwright Alfred Jarry who worked his whole life to embrace the subversive absurdist theater movement with his “Pere Ubu” plays. After studying his works and the works of Samuel Beckett (“Endgame”) and Eugene Ionesco (“The Bald Soprano”), I was naturally drawn to the absurdity of modern horror comedies in cinema. Genre films like Army of Darkness, The Ice Pirates and Terror at Blood Fart Lake are the modern-day versions of historical absurdist plays from the turn of the last century. There is a little slapstick, a lot of humor and some very seriously frightening moments