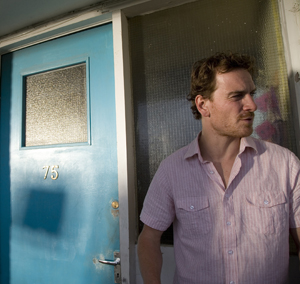 Few actors have quite the same charm and character of Michael Fassbender.

The 32-year-old Irish heartthrob, who charmed his way into Hollywood as the scantily clad young Spartan Stelios in the box office hit 300, certainly doesn’t need the luck of the Irish. With television and movie credits like Steven Spielberg’s “Band of Brothers,” the critically acclaimed movie Hunger and Quentin Tarantino’s Inglourious Basterds, Fassbender has a great future in Hollywood.

Startlingly handsome with magnetic blue eyes, an impish grin and a charming disposition, the Killarney native with theatrical roots in the United Kingdom became an overnight sensation in 2008’s Hunger when he played Irish Republican Army leader Bobby Sands, who died in the notorious Maze prison in Northern Ireland after a hunger strike. For the part, Fassbender, who prides himself on role preparation, went from 160 to 125 pounds over a 10-week period to accurately portray the wasting body of Sands as the hunger strike wore on.

Snagging a British Independent Film Award among others, he showed further promise in the Tarantino war flick Inglourious Basterds by playing the suave British officer and film critic Archie Hicox. In his latest role, however, his magnetic appeal is put to a discomfiting effect.

In the Andrea Arnold-directed drama Fish Tank, which won a Jury Prize at Cannes, Fassbender plays Connor, a strikingly handsome Irish charmer who promises to bring love and happiness to a single mum played by Kierston Wareing.

“Connor, for the most part is a good-natured person. He’s very easy with kids and is a very personable person, but in a moment, he made a wrong decision,” says Fassbender, who was initially thrown off balance by Arnold’s directing process, which includes casting mostly non-actors and withholding the script.

“When Andrea gave me the premise of the story, I was a bit nervous to begin with because I usually do a lot of prepping so when I get on set I am ready to go because I am bad at learning lines. So it was a bit disconcerting not to have the whole script to take a look at and form the character and get an idea of the decisions he makes throughout. But I got that she wanted to keep it fresh and right, so I put my trust in her,” he says.

Set on a decaying council estate in gritty Essex, England, and filmed over six weeks in the summer of 2008, Fish Tank offers a bleak, nihilistic look at life in Britain as seen through the trials of 15-year-old Mia (played by 18-year-old newcomer Katie Jarvis) and echoes similarities to Arnold’s debut project, Red Road, which also won several accolades including a Jury prize at Cannes in 2006.

“Andrea’s very good at creating evolvement. She’s a great filmmaker and is nonjudgmental of the characters she portrays. I had seen Red Road and really respected her and wanted to work with her as I find her storytelling very interesting because it’s in that grey area,” says Fassbender, adding that he enjoys movies that offer some elements of risk.

“I usually just go on the basis of who the director is and what’s written on the page,” he continues. “That’s usually how I make a decision. It doesn’t matter if it’s commercial or low budget, but it’s always nice to have some sort of risk element involved. If you stay in your comfort zone, you never really grow.”

It’s a selection process that seems to work for the amiable actor who has left the confines of the Irish countryside for the sprawling City of Angels to further his acting career.

“The weather is so beautiful everyday and I like it here a lot,” says the actor. “From the people busking on Venice Beach to the dive bars, there’s a really creative energy here and the city revolves around the acting industry, so it’s hard not to get sucked into how popular you are. But I try not to get caught up in that because you can get disappointed. I am getting [access] to new filmmakers and interesting scripts now come my way, so I have to see what happens next.”

Interviews
Mary McNamara: After losing a child, 'Pieces of a Woman' filmmakers channeled their grief into art
313 views

Interviews
Ai Weiwei on activism in the US, his art response to COVID-19 and a secret Wuhan film
932 views