The Spy Next Door: Jackie Chan and Amber Valletta – The New Odd Couple 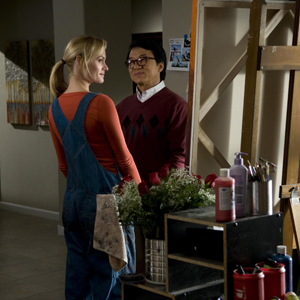 Amber Valletta (as Gillian) and Jackie Chan (as Bob Ho) star in The Spy Next Door
(Credit: Colleen Hayes)

First it was the portly advertising executive in Hitch, now it is a thick accented pen salesman who happens to be her neighbor in The Spy Next Door. The stunningly attractive Amber Valletta has been paired with two leading men who most audiences would not initially expect her to be cast alongside: Kevin James and Jackie Chan.

Alas, here she is in The Spy Next Door, a single mother of three who is openly dating someone the audience least expects the former model to be dating – a quirky, apparently bumbling pen sales executive who does not fit the profile of a dashingly hot romantic lead. Yet, everyone involved with the filming of The Spy Next Door seemed to be OK with Valletta pairing up with Chan, especially the two actors themselves.

“I want to be a lover,” Chan jokingly admits.

All joking aside, Chan frankly says The Spy Next Door is less of a romance film and more of a family-friendly comedy that coincidentally has a love story in it. Chan says his audience expects more action from him – most of his films do not involve much heavy romance – and hence the potential oddity of being paired with a model as his love interest should not be a big deal.

“If you look at my old movie, like Police Story, I do have a romantic scene. I always have fun romantic [roles],” he says. “The most important thing the audience sees in me is not the romantic scene; it is an action-style movie and the stunts. That’s most important.”

Valletta shares that it was not so much of a stretch to see her opposite Chan in a romantic role, mostly because she has worked with a wide gamut of actors with varying looks, styles and skills. Furthermore, Valletta keenly points out that sometimes a story is less about looks and more about finding love through substance.

“As an actor, I’ve been paired with everyone from Kevin James to [Nicolas] Cage to Jackie Chan to Gerard Butler and Michael Keaton. That’s a huge range,” Valletta chuckles. “I think people still believe it when they see me with someone like Kevin James or Jackie Chan.”

“I want them to believe it,” she continues, “and the intention is because of the people who they are, and that’s why they fall in love. So, it doesn’t have to be Brad Pitt.”

The director, Brian Levant, is a little more to the point, stating that the chemistry between Chan and Valletta was second to none, and he was certain that chemistry would be apparent to audiences on screen.

“Sometimes things just work out very well, and this one did from top to bottom,” Levant says with a wide smile on his face.

Indeed, Chan, Valletta and Levant had other, more important challenges to overcome than worry about what audiences would think of a model and a martial arts action star finding love on screen.

For Chan, he struggled to deal with a few things both personally and professionally while shooting The Spy Next Door in Albuquerque.

“There are three challenges,” he states frankly, beginning to count the ways. “First, there is always English; second, animals; then, children. It’s not easy; they [the children] never listen to you, especially the youngest one.”

Beyond that, Chan also struggled with his body. An actor who gained popularity with moviegoers by doing his own breathtaking stunts – with the end credit bloopers almost as funny as the film itself – Chan is finding it tougher to continuously push himself physically on set.

“I forget how old I am,” Chan humbly says. “Sometimes, I found out, wow, I am not like I used to be. It’s not easy anymore.”

Interestingly enough, Valletta found roles such as this one are actually more suited for her.

“I’m a bit of a goofball,” she says with candor. “I think it’s much more intimidating to become vulnerable in front of people and cry. For me, it is easier to do something silly and extroverted to make people laugh.”

For Levant, Chan’s stunts and Valletta’s goofball nature was a perfect recipe for him to make a family-oriented film.

“This isn’t Jackie Chan throwing ninja stars in people’s foreheads,” he assures, “but this is a family-friendly movie you can trust.”

The Spy Next Door releases in theaters Jan. 15.