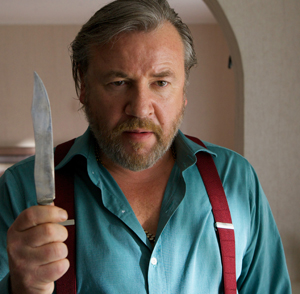 In what is most certainly the most poorly named film since The Midnight Meat Train, 44 Inch Chest manages to have quite literally nothing to do with the film or subject matter at hand.

Ray Winstone plays Colin Diamond, a good-natured family man who is devastated to find out that his wife of over 20 years is cheating on him with a young waiter. Colin’s group of eccentric, foul-mouthed friends decides to kidnap the waiter to exact revenge.

Performances from Winstone and company are quite good. John Hurt’s Old Man Peanut character in particular has quite a few lines of vulgar, priceless dialogue, and Ian McShane could not have been cast better here.

The dialogue is at times hysterical and is generally extremely well written in a kind of Quentin Tarantino rhythm. Rest assured that those with gentle ears will be offended to high heavens due to the explicit nature of the British language. One particular four lettered word that starts with a “c “and ends with a “t” is uttered so many times I felt like I was drinking in a British pub.

So, we have good performances and great dialogue. The only thing that is missing is a bit of plot. Quite simply put, not a whole lot happens in this movie. The main character, Colin, spends so much time sulking in his misery that after a while it becomes excessive. Are the British all this emo?