Can the Lake Show Stay Healthy? 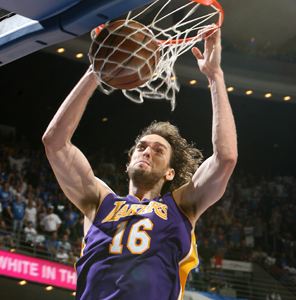 As of now, the Los Angeles Lakers continue to be the best basketball team in the NBA. Their 29-8 record is the most prominent mark among all squads. And the Lakers still have the best player in Kobe Bryant.

The question is whether the unit can remain healthy. Pau Gasol’s latest left hamstring injury, which he suffered Jan. 3 versus the Dallas Mavericks, has been a huge blow to the team’s size advantage over opponents.

More important, in Gasol’s current inability to play, the Lakers have lost scoring production from arguably one of the best power forwards in the game. Before his injury, Gasol was averaging an impressive 16.8 points, 11.5 rebounds and 3.4 assists per game. This is quite the integral loss for the group in terms of production.

Earlier in the season, Gasol did not play in the first 11 contests due to a strained right hamstring. The Lakers went on to produce an 8-3 record, but they could have easily been undefeated had the Spanish athlete played.

Thus far, Los Angeles is 2-2 without Gasol in the lineup after his latest physical setback. One victory came against the visiting Houston Rockets on Jan. 5 (88-79) and the other over the Milwaukee Bucks Sunday by a score of 95-77.

However, their two losses were on the road. On Jan. 6, the Clippers ousted the purple and gold convincingly (102-91); they currently hold bragging rights for the city. The Lakers then went on to suffer a punishing loss against the Trail Blazers in Portland. The home squad punched their way to a 107-98 triumph.

Again, Gasol did not play in both games, and his presence was evidently missed defensively and offensively. The fact of the matter is that with Gasol in the starting rotation, the Lakers are a championship caliber team, especially because Lamar Odom comes off the bench.

When Gasol is not present, Odom has been inserted into a starting role as a power forward. He has performed well, but Odom is no Gasol, nor vice versa. In fact, the essential point to recognize in the matter is that the Lakers are better off with Gasol as a starter and Odom as a bench player. Los Angeles has more depth with this system, and the team easily accomplishes specific tasks and earns more wins as well.

Against the Houston Rockets earlier this month, the Lakers gained a victory, but it was no easy task. Gasol was out. Odom was ill because of gastroenteritis (stomach flu). Bryant’s finger was hurting, and he was slightly below his usual game that night.

Bryant shot 9-of-23 from the field for 22 points and committed four turnovers.

“My finger was horrible, horrible,” Bryant told the press.

He went on to say that his constant movements with his left hand were a necessity for him because of the pain he experienced, but he battled through it as he has in the past with other injuries.

Nonetheless, others stepped up their game, and Odom was one of those individuals. Odom scored 17 points, accumulated 19 rebounds and dished out nine assists; he finished one dime shy of his 13th career triple-double. Center Andrew Bynum flourished in the affair, too, having contributed 24 points and eight boards.

Bynum did not take all the credit in the win though.

“That was a monster game by him,” Bynum told the press, speaking about Odom.

Head coach Phil Jackson was quite proud of Odom’s effort against the Rockets since his production was terrific.

“The guy that was unable to practice yesterday [Jan. 4] and was pretty sick was the guy that was the star in the game,” Jackson told the press. “[Odom] knew we were at a deficit tonight without Pau [Gasol].”

Other players who at times have not played because of an injury include forwards Ron Artest (concussion) and Luke Walton (back). Artest is now back in the starting lineup, but Walton has not played a single second since Nov. 13 in Denver when the Lakers lost to the Nuggets 105-79. During this game, Walton aggravated his back and is slowly but surely recuperating while in physical rehab.

After finishing a two-game road trip in Texas (22-13 San Antonio Spurs and 25-12 Dallas Mavericks), the Lakers host two games (17-18 Clippers and 25-12 Orland Magic) before embarking on a long and difficult eight-game East Coast road trip. It includes games at 29-10 Cleveland and 26-9 Boston.