Los Angeles Arts Month: Reviving the Soul of Our City 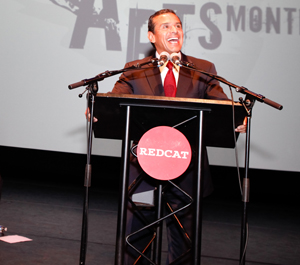 The second annual Los Angeles Arts Month kicked off on Jan. 5 with a celebration in downtown Los Angeles at REDCAT in the Walt Disney Concert Hall. A group of high profile art aficionados and city leaders, including Mayor Antonio Villaraigosa, were in attendance to celebrate the opening ceremony of the second annual event. Officially running from Jan. 1-31, Los Angeles Arts Month encourages Angelenos to celebrate and patronize the city’s abundant theaters, galleries and museums.

“I think that one of the most energizing and nourishing things of L.A. Arts Month is that it provides a forum, a venue, for you guys,” shares L.A. Department of Cultural Affairs General Managser, Olga Garay. “Everyone is so busy in their lives, many of you, although are friends or colleagues, don’t really get to spend quality time together. It’s really a way to reengage with fellow travelers down this often rocky road. We’re all members of this wonderful arts community.”

Attracting local participation was one of the primary bullet points of Jan. 5’s event, which also included an afternoon panel, “Museums: Not Just For Tourists” at MOCA, Los Angeles’ Museum of Contemporary Art.

January highlights in downtown include the “First Thirty Years” exhibit at MOCA.

The rest of the city will also play host to a wealth of events. “Cryptonoche” on Jan. 15 will showcase Marcele, a native of São Paulo, Brazil, and her honey-sweet vocals at Club Tropical (8641 Washington Blvd., Culver City), and floral designer Ray Rucker leads flower enthusiasts on a walking tour of the flower district trade on Jan. 16 (descansogardens.org). Both Miracle Mile and Culver City will each host their own Art Walk this month as well.

Beyond January, through “community outreach, local promotional ticket giveaways and a viral word-of-mouth and print and radio campaign,” the city will extend the spirit of Arts Month. The celebratory month itself is a catalyst to generate awareness in hopes of increasing attendance for events throughout the year.

Yosi Sergant, an arts producer and promoter, described the event as “the inauguration of something longtime coming in Los Angeles.”

“It’s a unified arts community coming together to celebrate the role of the cultural institution and the individuals that make up the fabric of a really creative community here in Los Angeles,” continues Sergant. “When people like this get together in one room with the unified goal of celebrating the city of Los Angeles, it’s kind of special.”

The festivities also included mezzo-soprano Ronnita Nicole Miller performing a selection from “Das Rheingold,” one of four operas in Richard Wagner’s “The Ring Cycle,” which will be held this spring, and will be accompanied by an arts festival. Already, more than 100 arts and cultural organizations will offer programs that spin off from what could be L.A.’s most prominent arts extravaganza this year.

Each participating organization will be responsible for planning, marketing and conducting their own component – whether it be film, concert or exhibition. It takes a village to raise a child, and the city hopes that the collective efforts of the 100 organizations will be more prominent than that of any individual group. L.A. Opera will serve as the footing and provide the necessary name recognition to justify the funding.

Much of the day’s speeches revolved around the concern for general arts funding in the city. However, although admitting to the lack of sufficient government financial support, Mayor Antonio Villaraigosa remained optimistic about the future of the L.A. arts scene.

“In this tough budget time, L.A. has invested in the arts less than most big cities in the United States,” Villaraigosa began before later describing L.A.’s arts and culture scene as the “soul of the city,” citing the 850,000 jobs the creative world provides the city and the billions of dollars it generates for our economy.

The presentation also included a surprise announcement that Los Angeles was selected for the AAM (American Association of Museums) Annual Meeting and Museum Expo for 2010.

“L.A. is the perfect choice for AAM at this time in our history. We are making a concerted effort to reach out more to our international and diverse domestic colleagues, to make them more part of our conversation so that we may all better serve the public,” explains AAM President, Ford Bell. “What better location than the world’s most cosmopolitan city is there to do so?”

The AAM Meeting and Expo is a networking event for arts and museum professionals from around the world, and will be held May 23-26. Bell continues: “L.A. is one of the four to five top cultural capitals on the planet. To have the world’s largest gathering of museum professionals in such a city makes perfect sense.”