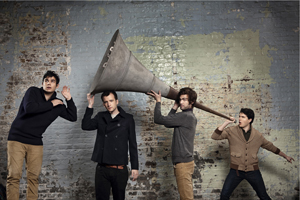 It’s been almost exactly a year since Vampire Weekend dropped their highly successful self-titled debut, and now the band is back for another bite with Contra, released this week through XL Recordings. The new record finds the band experimenting with their sound a little bit, like on “I Think UR A Contra” where acoustic guitar is used for the first time on a VW recording, and on “California English” where Auto-Tune is employed.

Not all of the new sounds were planned, explains the band’s Rostam Batmanglij. “I started making ‘Diplomat’s Son’ in my living room. At one point my roommate walked in and turned on the kitchen faucet and you can hear it running behind the guitar solo.”

Vampire Weekend’s shows are the hottest tickets going right now; after selling out the Fonda here the guys went home to New York for several sold-out shows, and they have a string of dates in England in February that are also all sold out. Good news about a free listen to Contra though – KCRW.com is streaming the whole album now through Jan. 18.

The drummer for popular Huntington Beach-based Avenged Sevenfold has died. James Owen Sullivan, known professionally as “The Rev,” was discovered in an unresponsive state in his home Dec. 28. Sullivan apparently died of natural causes, although at press time the Orange County Coroner’s Office was still investigating pending the result of toxicology tests.

The Sullivan family and the surviving members of Avenged Sevenfold posted short comments on the band’s MySpace page, Avenged Sevenfold saying in part, “Jimmy was not only one of the world’s best drummers, but more importantly he was our best friend and brother. Jimmy you are forever in our hearts.” Sullivan was 28 years old.

The Roxy Theatre and D’Addario have teamed up to hunt for hot, new, upcoming bands with a competition called the Rock the Roxy YouTube Video Contest. At stake is a prize package worth over $20,000 and a chance to perform at the Austin Rox showcase in Austin in March.

Musicians everywhere can enter by posting their video at YouTube; entries must be less than three minutes in length, show the band “rocking out” and be submitted as a video response. The top 50 bands with the most video views by Feb. 9 win prize packages from D’Addario and move on to the semifinals.

The winning band will perform at Austin Rox (airfare and lodging for up to five band members is included) as well as take home a prize of $500 cash and gear from Zildjian, Tama, Ibanez, Marshall, Vox, Guitar World and Korg. A one-year endorsement deal with D’Addario, Evans and Planet Waves, worth $5000, also goes to the big winner. Find all the details at rocktheroxy.com.

If you wanted to keep up with the garage music scene in the ’70s your best bet was to grab copies of the Bomp! or Who Put the Bomp! fanzines put together by Greg Shaw. Now hundreds of the best pieces published in the zines, written by scribes like Dave Marsh, Lester Bangs, Lenny Kaye, Phast Phreddie and Shaw himself have been compiled in the new soft cover coffee table-style book Bomp! 2 – Born in the Garage.

Everything from surf to psychedelic, Mexican punk to British R&B and Dutch rock to pirate radio is covered in the tome. If it started underground and happened between 1970 and 1981, it’s touched on here.

There’s also lots of ink for important bands from earlier days like the Seeds, the Standells, the Knickerbockers and the Shangri-Las, plus informative chapters dedicated to the British Invasion, early garage scenes in places like Michigan, Boston and the Bay Area and even an essay on weird Beatles novelties.

Citay: Dream Get Together

San Francisco-based Citay are about to release their new one, Dream Get Together. The third batch of psych-rock from the cosmic wanderers drops Jan. 26 on the Dead Oceans label, and Citay will shortly thereafter find themselves in our city, playing the new material at an Echoplex show Jan. 28.