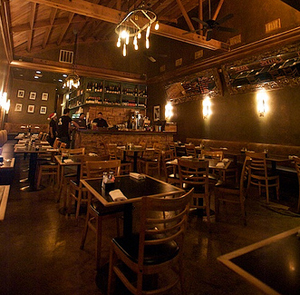 On Pico Boulevard just north of Overland Avenue, it’s out with Jack Sprat’s Grille and in with the Six, the brainchild of two Venice High alums, Devin Klein and Jake King, and Malibu native Will Karges. Though Klein is a first-time restaurateur, Karges has had successful runs with Jones Hollywood and Johnny’s Pizza and King with Rix, El Dorado and Drake’s Venice.

The revamped eatery adjacent to the Westside Pavilion is already receiving a booming word of mouth business in the month since its soft open. With its spacey high ceiling, artful sconces, vintage wooden bar, recycled wine crates and Edison light bulbs hanging from iron pot racks built from scratch, the rustic atmosphere whisks eaters away from bustling Pico Boulevard.

But it’s the food that will have you praising the new owners. Headed by 24-year-old Executive Chef David Gussin, this is the young epicurean’s first go-round as top chef. He’s offering quite a diverse selection of bites, from a Fried Chicken with Honey Hot Sauce Sandwich and Sesame Crusted Albacore Salad to pizzettes and flatbreads and, of course, hearty entrées.

While not one item on the menu looks skippable, I can only speak of what I tried. Starting with the Beet Panzanella, which, like many of their dishes, is brought out on a wooden board, this appetizer consists of small groupings of fig, ricotta, bacon and arugula scrumptiously arranged together and sprinkled with a Sherry almond vinaigrette. As you’ll see, the tapas-style portions make trying many dishes mandatory.

The Prince Edward Island Mussels sit in a chorizo broth, and although a small offering of bread is allocated, you’ll want to ask for more, as not one ounce of the broth should go undipped. The shaved Brussels Sprout Salad with roasted almond and satsuma (like a mandarin orange) topped with a warm, spiced cider vinaigrette adds a nice infusion of veggies to prepare you for the pizzettes and flatbreads to come.

On that front, we tried the Fennel Sausage Pizzette with caramelized onions and mozzarella, with a light, perfectly crisp crust. The flatbreads are more adventurous, and definitely recommended for those searching for something out of the ordinary. The Potato Rosemary with garlic tapenade and fontina cheese bursts with flavor that’s tapered by the smooth taste of potato, while the grilled Kabocha Squash with brown butter, crispy sage and mozzarella isn’t comparable to anything you’ve ever eaten before.

Hopefully, after trying a few starters, you’ve saved room for the main courses – because the savory surprises never end. The Potato Chip Crusted Salmon with leek soubise, confit Meyer lemon and caramelized cauliflower is light on your stomach and heavy on taste.

Then there’s the Pastrami Spiced Prime NY Steak with caraway spaetzle, freshly made sauerkraut and roasted beef jus. As the chef describes it, it’s his take on a Pastrami Reuben.

The idea behind the catchy name, the Six, was sparked from a sextet of artists in 1920s NorCal that represented a cozy clique and out of the box thinking. At a cabin called The Chow House, they would engage in lively discussion and indulge in savory homemade meals, wines and handcrafted brews. The concept leaks into the décor, with the owners’ top six actors represented on their sconces, to the menu, with six specialty ales on tap. In the future, the guys hope to make “The Six” interactive with their customers, letting them debate who "The Six" are.

Not only is the restaurant seducing old and new clientele but the petite bar area is packed with a hipster chic crowd. “Wine Wednesdays” occurs weekly with wine by the glass starting at $5 and complimentary flatbreads. It is oftentimes hosted by guest wineries.

The Six also caters, offering a mobile pizza oven for private parties and events, and for take-out, the 6-Pack, an adult version of a “Happy Meal” or bento box. Soon local artists will compete to have their artwork displayed on the pizza boxes and 6-Packs.

Now open for lunch and dinner, there is free parking after 6 p.m. at the Citibank parking lot behind the restaurant. They offer a $6 corkage fee and reservations can be made for parties of six or more.

One of the best parts about the Six, besides the food, chef, friendly owners and atmosphere, is its location. After a lavish meal you can roll yourself down the street to the Landmark and take in a recent release, or stumble into Barnes & Noble or the Westside Pavilion for a mini – or major – shopping spree.