"The Pee-wee Herman Show": Paul Reubens returns to the playhouse. 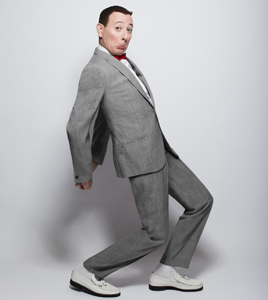 During the 1980s, TV got a fresh take on a children’s morning show led by a man in a grey suit with an army of puppets and future celebrities. After seeing the huge success of the Tim Burton-directed Pee-wee’s Big Adventure, CBS decided to give Paul Reubens his own series in 1986. “Pee-wee’s Playhouse” took audiences by storm and garnered 22 Emmy Awards during its five-year run.

But before the big screen and all of the Emmys, creator Reubens was hard at work with his live version of the playhouse that revolved around a character that came from an acting exercise.

“Pee-wee began as a character in a sketch at the Groundlings in Hollywood,” Reubens comments. “We were doing a fictional skit about a club like the Improv, and we had to play different stand-up comics. I wasn’t any good at doing stand up, so I decided to be a comic that never made it. And Pee-wee came out of that.”

With a new character getting a lot of attention from his peers, Reubens developed a world around the man known as Pee-wee Herman. Taking the stage at the Roxy Theatre in 1981, Reubens integrated puppets and actors into a show that got everyone’s attention.

“I couldn’t have predicted all of the attention. But people were reacting way stronger at the time. This show was a midnight show that had some adult material that was designed so that if they laughed at it, I didn’t teach it to them, but if they didn’t, then it went over their head,” he says.

It certainly didn’t go over the head of Warner Bros., who quickly offered Reubens the chance to bring the playhouse to life on screen. From here, he took the character of Pee-wee and moved him right into our living rooms with his hit Saturday morning TV show.

So, for the live show taking over the stage at Club Nokia from Jan. 12 to Feb. 7, which version will audiences get: the toned-down kids’ show that ruled Saturday mornings for much of the ’80s or the late-night Hollywood cult classic?

Reubens gives a little insight into what audiences will see: “I didn’t think of it that I had a kids’ show to do. I wanted to do a more adult show, but that kids could enjoy it. Halfway through making this I realized that you can’t control who’s going to come to it. I’m trying to split the difference, and that’s tough.”

And if shaping the right script was tough enough Reubens will be on stage with puppets most of the time, not actors.

“Currently, I’m rehearsing my scene with Globie using a beach ball. If something doesn’t go right, I don’t have anyone to improvise with, just puppets,” he shares.

Reubens goes on to compare the current live show with his television show.

“It’s very technically ambitious. When we did the Saturday morning show it took 10 days to shoot a 24-minute episode. Now it’s over 80 minutes, and it happens in real time. We’ve never done this before. There’s a plot, sets, costumes, lots of costumes. It’s a play,” he says.

The billing for this theatrical event may only total four weeks, but be advised that this is just the beginning.

Reubens shares, “I’m bringing it back because I want to make a movie. I’ve always wanted to make a movie about ‘Pee-wee’s Playhouse,’ and this was the best way to test it out.”

Reubens adds that he doesn’t want to take the live show further, but there are already offers coming in from Broadway to Australia. Wherever Pee-wee’s next adventure may take him, he will always be in our hearts and also newly adored by those that are now seeing him for the first time.

The opportunity to see an artist go back to his roots and bring his signature creation to life is a treat all its own. The kid that never grew up is about to remind Los Angeles what fun is all about.