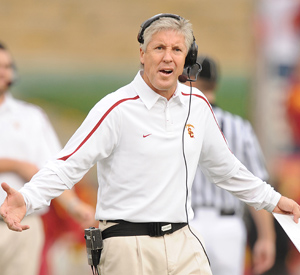 As the USC’s men’s basketball team travels across town to face UCLA in Westwood this Saturday, they will find themselves in unusual company. Only days after the Trojans vacated victories in its 2007-08 basketball season, the school’s football program now faces the prospect of sharing a similar fate with its string of national and conference titles won just a few years ago. For the first time in forever, both the USC basketball and football programs will be commiserating together in the lonely throes of college athletics’ detention halls.

On Sunday evening, the Los Angeles Times reported that USC head football coach Pete Carroll officially submitted his resignation to school athletic director Michael Garrett. Perhaps aware that something really bad is about to go down, Carroll decided it was time to get the heck out of Dodge before the Trojan empire he worked so hard to build came crashing back down to the ground at the snap of a finger.

Carroll leaves USC after spending the past nine years making football relevant in Los Angeles and allowing the city to forget the NFL ever existed. Now, he is going to be sleepless in Seattle as he tries to make football relevant again in the Pacific Northwest.

As Carroll is reportedly accepting the head coaching position with the NFL’s Seattle Seahawks, the timing of Pretty Boy Pete’s departure is oddly on the heels of the school’s basketball team suffering sanctions in relation to recruiting violations surrounding O.J. Mayo. It would be fair to say, in light of what has transpired with the school’s basketball program, Carroll saw the writing on the wall. Ultimately, Carroll had to make this move now to save his career.

If the NCAA persists in its probe into USC Athletics and discovers the alleged recruiting anomalies surrounding Carroll’s tenure in University Park to be true, he might as well take a suitcase full of millions of dollars and throw it into a raging fire – a few moments before he tosses his coaching career into the inferno. Worse yet, had he resigned amidst the NCAA’s hammer coming down hard upon USC, Carroll would be tossed out of Los Angeles with ultimate embarrassment and humiliation.

With the football program potentially losing its national and conference titles, Carroll did what was best for him in cashing in on his collegiate “success” while he still could – before the wrath of the NCAA suffocated him beyond repair. Now, with Carroll on his way to Seattle, he will ensure his professional survival.

Should the NCAA indeed discover recruiting violations during his tenure, Carroll will not suffer much collateral damage, as the ink is already dry on his new deal in Seattle. He basically set himself up to suffer no worse than a slap on the wrist. By making this move, Carroll will still make his millions and preserve all of his potential coaching options in the future – including calling it a career on his own terms.

The bigger picture is what happens to USC Athletics. Will Southern Cal ever recover from this?

When the handicap parking scandal hit the UCLA football team in 1998, the program never recovered. That year, the Bruins fell from their perch atop the first-ever BCS rankings to mediocrity in an instant, only to stay at that level for more than a decade now.

If Carroll’s departure is a hint of worse things to come, Southern Cal’s fall will be much harder – almost Trojan Horse-like. Of course, the worst may never happen, and ideally this is just Carroll moving on and pursuing other opportunities – which he has a right to do.

Yet, if this really is a hint of worse things to come and the NCAA does indeed discover misdeeds during Carroll’s tenure, then not only will everything the student body and alumni held sacred be thrown out the door, but the faith and trust Trojan Athletics spent generations building will be tainted and violated for years to come.

Even worse, with sanctions hitting the two most revenue-driven sports in college athletics, the repercussions of locking down on USC basketball and football will be devastating – loss of scholarships, recruits, reputation, respect and goodwill. The situation would be darn near irreparable.

If the events to transpire after Carroll’s departure only get worse, this could be the dawn of a new era – the mediocrity of USC Athletics.