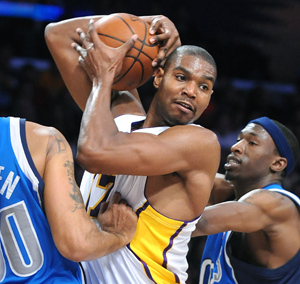 By week’s end, Andrew Bynum will be playing basketball in Minnesota.

Yes, you read this right. Bynum will no longer be a member of the Los Angeles Lakers.

Just like Vlade Divac was a decent center holding fort between Kareem Abdul-Jabbar and Shaquille O’Neal, Bynum was keeping the lane work between O’Neal and Chris Bosh. Yes, Bynum is this generation’s version of Divac.

Divac was traded away to bring us Kobe Bryant.

Bynum will be traded away to give us Bosh.

Interestingly enough, a New York Post article suggested the Lakers trade Bynum to the Toronto Raptors for Bosh. For those of you writing off that suggestion as hearsay or rumor, hold your horses. It may not be such a bad suggestion after all.

Having some fun with the ESPN Trade Machine, I looked into the different possibilities of trading Bynum for Bosh. One trade scenario the ESPN contraption accepted was the following deal: Raptors get Bynum, Adam Morrison, Sasha Vujacic and D.J. Mbenga. The Lakers would get Bosh, Jarrett Jack and Patrick O’Bryant.

This is actually not as bad a trade as it seems at first blush. For one, Vujacic’s contract would be off the books – all $10 million of it. Not to mention, the Lakers would also unload Bynum’s contract, which has about $30 million remaining and runs through 2012.

In return, the Lakers get a solid player in Bosh – even though his game is relatively similar to Pau Gasol’s. Yet, his contract expires this summer, so that gives the Lakers some flexibility in case Bosh is not a perfect fit.

Also, the Lakers get a respectable point guard in Jarrett Jack. A solid defender of a point guard is what the Lakers need the most, and that is exactly who Jack is. Oh, and he can score a few points and dish out a few assists, as well.

Finally, the Lakers also get some much-needed size on the bench in O’Bryant.

The question is what value Bynum will have for Toronto beyond his wildly speculated All-Star potential, the one that everyone thinks he has but has yet to fully realize.

Perhaps the Raptors will not be too excited about Bynum on its roster, they may be a little more excited about having Al Jefferson in the fold. With the Timberwolves sporting an 8-30 record – worst in the Western Conference and second worst in the NBA – they are definitely open to trading Jefferson away. So let us add him to the mix.

The ESPN Trade Machine approved a trade that would have the same three players going to Los Angeles, but Jefferson joining Morrison, Mbenga and Vujacic in Toronto.

Meanwhile, Bynum would be off to Minneapolis. The Raptors’ Demar DeRozan would have to be thrown in and sent to Minnesota just to balance out the deal.

Such a trade would reunite Wolves coach Kurt Rambis with Bynum, giving the former Lakers assistant coach an athletic big man and a promising young shooting guard to complement Kevin Love. With Love, Bynum and DeRozan, the Wolves have three players to anchor its currently volatile starting lineup.

Furthermore, Bynum will be in a familiar system, what with Rambis running a triangle offense similar to the one in Los Angeles but allowing for more athleticism. With fewer star players (read: Bryant) to share the ball with, the prospects for more playing time and a free-flowing triangle offense is the ideal situation for Bynum to explore his true potential and reach his All-Star status.

Sure, Laker fans will have a bad taste in their mouths to see Bynum thrive and flourish with Rambis in Minnesota. Then again, those same taste buds will quickly forget about that bad taste when Bosh is helping Bryant, Gasol, Lamar Odom and Ron Artest carry the Larry O’Brien trophy down Figueroa in five months.

For those who are not so sure about this trade, the ESPN Trade Machine speculates the Lakers would win 10 more games than they are projected to win with its current roster.

Sorry, Drew. Loved ya while you were here, but have fun discovering the land where the Lakers used to play.