The Main Drag: You Are Underwater 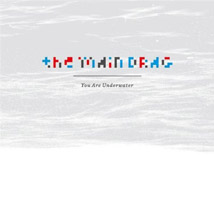 On their latest endeavor, You Are Underwater, Boston indie heroes the Main Drag prove themselves the kings of inconsistency. The album kicks off with “Homosuperior,” a psychedelic-flavored pop gem, then bounces into “Tricky Girl,” a deliciously catchy bed-jumping anthem. There is a certain innocence to these songs, a sweet playfulness that lifts the spirit.

The following tracks, “Don’t Let Me Down (Slowly),” “Talk Them Down” and “Megatron” are dreamy and lush with jagged edges lurking just below the shimmering surface, but they fail to live up to their predecessors. Unfortunately, from here the album collapses into boredom, with the remaining two numbers on this mere seven-track release proving less than imaginative and basically forgettable.

The album ends with the bonus track “A Jagged Gorgeous Winter,” a track pulled from their last album that was recently featured on “Rock Band 2” and used in a Target ad.

A few bummer tracks are acceptable on a longer collection, but if this is the best and the most that the band could churn out, this franchise is in trouble. Could the Main Drag keep the momentum of the early tracks, this brief release could soar, but instead it barely gets off the ground.

You Are Underwater is currently available.