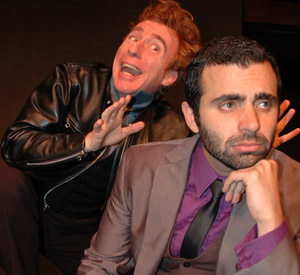 We may have had Shakespeare forced upon us in high school English classes growing up, which makes the idea of seeking out Shakespeare on our own pretty slim. This may ring true, but who said Shakespearen theatre has to be boring?

Shakespeare Unscripted puts an entirely new spin on something quite old and quaint. It’s a completely unscripted, improvisational show that takes the careful constructs of William Shakespeare’s art and puts a modern and funny twist on it.

The actors start the show by coming onto the stage and asking the audience for some ideas and suggestions. Once they have secured the participation of the audience, they’re off and running! The actors all wear a pop of color, which really adds to the show, since there is no actual set. They feed off one another, and must pay close attention to what each actor is saying as it remains a constant thread throughout the entire improvisational play.

After intermission, the cast reunites once again on stage to give a quick run down of the first half. This ensures that everyone in the audience is on the same page. Next, the actors ask the audience who we would like to see start the second half of the show. People shouting out suggestions hoping theirs are selected makes this show that much more exciting.

Once the play is in motion again, the cast, speaking with classic English accents, makes references to Shakespearean plays and adds witty commentary. These actors are so quick and nimble on their feet they make improv look easy.

The storyline of each show is different each night because there is no way to predict where the tale will go. This is a new and thrilling way to look at Shakespearean improvisation that hopefully will never grow obsolete.

Comedy
Impractical Jokers aka The Tenderloins, Serving Comedy Up "Well Done": Live at The Grove of Anaheim (1/17)
3,893 views