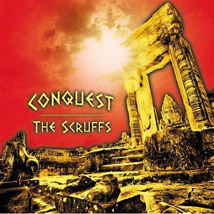 The Scruffs have a very interesting history. This Memphis band put out their first record (on vinyl) in 1977 and broke up shortly thereafter, yet put out new music under the same band name without officially reforming the band.

Now, they’ve officially reunited to put out Conquest, but I have to wonder why it took more than 30 years. Maybe that’s why I feel like the album is stuck in time, because Conquest is what the Beach Boys would sound like if they were from Scotland.

None of the album is bad, but it feels so retro that sometimes the lyrics catch me off guard (“iPod Girl”). The band tries to emphasize this divide between their own age and the new album, putting songs like “All the Pharaohs” and “Savage Teen” next to each other.

While a lot of the music is fun, upbeat, classic power-pop, I found myself losing interest in the music halfway through the album. The music doesn’t change that much from one song to the next and I really can’t get over how much “Curse of the Mau Mau” makes me want to break out in the Beach Boys’ “Papa-Oom-Mow-Mow.”