The Hurt Locker and More 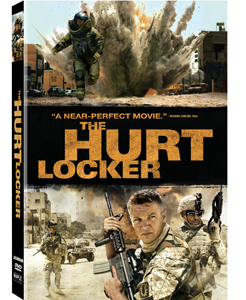 The Majors: The spate of Iraq War movies over the last few years has been insipid and preachy. The Hurt Locker finally gets it right. The tense film follows a bomb-defusing unit around Baghdad, showing a war without front lines, where even a dead body can be a destructive weapon. It marks a triumphant comeback for director Kathryn Bigelow. A cast of mostly unknowns gives solid performances, with cameos by Guy Pearce, Ralph Fiennes and David Morse.

Also available: Fame, a remake of the 1980 musical, is about several students at a New York academy for performing arts; Smokin’ Aces 2

Stranger Than Fiction: No Impact Man is an entertaining documentary about a writer who swears off electricity, TV, cars, toilet paper and more for an entire year, bringing along his wife and daughter for the ride. It’s a fascinating look at attempting to be as environmentally friendly as possible in the middle of Manhattan. It’s also a portrait of a modern family.

Funny Business: Mostly known as Howard Stern’s radio show sidekick, comedian Artie Lange’s audience has grown in the last year with the release of his book, Too Fat to Fish. His latest stand-up special, Jack And Coke, features all of his usual frat-boy humor.

Made in Japan: Linebarrels of Iron follows Kouichi, a bullied kid who wants to be a hero. Suddenly he finds himself smack in the middle of an intergalactic war of Machinas. Now he may be Earth’s only hope.

The Idiotbox: With its 20th season, “The Simpsons” became the longest running primetime TV show ever. It also regained some of its magic, being a marked improvement over some of the more recent seasons. It’s also the first season presented in hi-def, so everyone’s favorite TV family is available also on Blu-ray for the first time.

Glenn Close returns in her powerhouse role as a high-powered litigator in Damages: The Complete Second Season.

Under the Radar: Previously unavailable, Robert Altman’s little-seen Streamers is an intimate film centering on four friends about to be sent off the Vietnam. The group must confront their hidden prejudices when they learn that one of them is a homosexual. Based on a play by David Rabe, the film stars Matthew Modine.

Also available: One of Brittany Murphy’s final films, the thriller Across the Hall.

Blu Notes: The stylish and kinetic The Bourne Trilogy releases to Blu-ray (Jan. 27). Matt Damon stars as a spy with amnesia, on the run from his own government, trying to stay alive while discovering his past. The much-imitated films, from directors Doug Liman and Paul Greengrass and screenwriter Tony Gilroy, reinvigorated a dying genre.

The Green Berets (1968), starring John Wayne, was the first film to openly address the Vietnam War. That’s not to say it seriously delves into the divisive politics behind the conflict. On the contrary, it’s pretty much good ol’ fashioned propaganda. The Duke even wrote Nixon a letter requesting official White House endorsement of the film (He was denied.). The film follows an elite squad of commandos led by Wayne on a mission into South Vietnam. It’s a fun and a fascinating historical document.